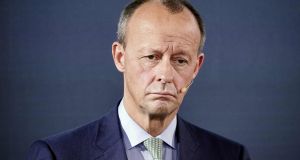 CDU politician Friedrich Merz: “I am leading clearly in all polls. If that was different there would certainly have been an election this year.” Photograph: Getty Images

Senior members of Germany’s ruling Christian Democratic Union (CDU) have dismissed claims by a leadership hopeful that they are conspiring to block his efforts to take over the party.

Friedrich Merz, an ally turned rival of Angela Merkel, is hoping to lead her party into next year’s federal election as she steps down after four terms. However, the coronavirus pandemic, and related restrictions on public gatherings, has seen the CDU postpone indefinitely its party conference, scheduled for December 4th in Stuttgart.

The decision was taken unanimously by a meeting of the CDU steering committee on Monday. For Mr Merz this delay, the second, is part of a go-slow campaign “by a considerable section of the party establishment” to give his rivals more time to boost their support.

One internal party poll suggests 45 per cent of CDU rank-and-file members would like the lanky 64-year-old as their next leader. Well behind on 24 per cent is Armin Laschet, the CDU premier of the western state of North Rhine-Westphalia.

“I am leading clearly in all polls. If that was different there would certainly have been an election this year,” said Mr Merz. “There is a ‘prevent Merz’ campaign in the CDU, a full broadside of the establishment here in Berlin ... that is infuriating ordinary members.”

Party insiders agree Mr Merz is less popular with the front bench but dismiss his framing of the race as elite-versus grassroots, pointing out that the broader membership never elects CDU leaders.

That is the job of 1,001 delegates from regional parties across the country. But strict limits on gatherings in many Covid-19 risk areas make the Stuttgart gathering a public health impossibility.

CDU officials are fearful of efforts to divide the party heading into an election year, with memories still lingering of the traumatic infighting that wracked the party after the departure of Helmut Kohl in 1999.

“It’s more important to concentrate on the good of the party and the country rather than starting new debates,” said Paul Ziemiak, CDU general secretary, whose thankless task it is to find a leadership conference format that is simultaneously compatible with health restrictions and party statutes.

With the CDU legally obliged to meet every two years to elect – or confirm – its leader, the clock is ticking. Senior figures are coming out in favour of an online conference this year, but questions remain on how to find a secure and legally sound system for several rounds of electronic voting.

Some CDU conservatives and liberals agree with the claims of Mr Merz, a man they view as their candidate.

Alexander Mitsch, head of the party’s value conservative grouping, tweeted: “Anyone who thought they knew every kind of political intrigue after five seasons of [the political drama series] House of Cards will know better after the transparent effort of the CDU to postpone its party conference.”