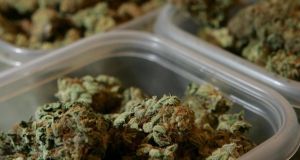 The cannabis plant for the new king took four years to develop, according to a Dutch cannabis lobby group, which says it is ideally suited to growing outdoors in the changeable weather

In a uniquely Dutch tribute a week after his investiture, the new king of the Netherlands has had a strain of cannabis plant named in his honour.

The plant, to be called Koning (King) Willem-Alexander, took four years to develop, according to the cannabis lobby group, Nederwietland, and is ideally suited to growing outdoors in the changeable Dutch weather.

“Anybody with a small balcony will be able to grow this weed and within eight weeks, it will produce enough cannabis to last a year”, said the group, which wants changes to the way cannabis production is regulated.

It also claimed to have planted seeds of the new strain in the grounds of the king and queen’s summer home in the jet-set resort of Porto Cheli on the southern Peloponnese coast in Greece, which the royals usually visit by yacht in late summer.

“In terms of overall drugs policy, the law on cannabis production has not made sense for the past 30 years”, said Nederwietland. “It is legal to sell cannabis, to buy it and to smoke it – but still nobody is allowed to grow more than five plants. It’s ludicrous.”

As a result, it added, organised crime had taken control of large-scale cannabis production – despite the fact that the decriminalisation of other aspects of the drugs industry had been aimed at loosening the criminals’ grip.

This is a view gaining significant mainstream support. Ten of the country’s city councils have now called for regulated marijuana production, including some of the largest, Amsterdam, The Hague, Rotterdam, Utrecht and Eindhoven.

“Marijuana doesn’t fall out of the sky”, said Labour Party’s Paul Depla, mayor of Heerlen in the southeast. “Every other aspect of drugs is regulated. If the government is serious about tackling illegal marijuana plantations, then the government itself must take over growing marijuana. That will make a real difference.”

Man is killed by rooster amid illegal cockfight in India 19:17
Germany’s health minister under fire over fundraising dinner 19:11
At least 18 dead in Myanmar, says UN, as police fire on protesters 19:06
Saudi allies reject CIA’s Khashoggi report amid calls for crown prince to be sanctioned 16:05
Seven-day lockdown begins in Auckland after new Covid-19 case 15:43