Austrian government to turn Hitler house into charity base 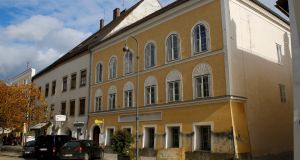 The house in which Adolf Hitler was born in Braunau am Inn, Austria. Photograph: Leonhard Foeger/Reuters

Austrian government officials have decided to transform the home where Adolf Hitler was born into a base for a charity, and not tear down the property as some demanded.

Thursday’s decision comes a day after politicians overwhelmingly approved an interior ministry Bill to dispossess the owner, who had refused to sell the empty building in Braunau am Inn, a town on Austria’s border with Germany.

Provincial governor Josef Puehringer says destroying the structure would have fuelled accusations of “tearing down a piece of burdensome history”.

Instead, officials want to remodel the property’s facade to eliminate its draw as a shrine for admirers of the Nazi dictator, who was born in the house in 1889.

Mr Puehringer says the house will be offered to an agency running a workshop for disabled people.