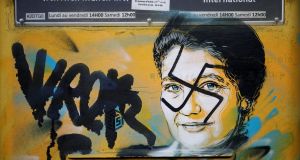 A vandalized mailbox with a swastika covering a portrait of the late Holocaust survivor and renowned French politician Simone Veil by Christian Guemy is seen before its renovation in Paris on Tuesday. Photograph: Benoit Tessier/Reuters

Anti-Semitism is rising sharply across Europe, experts have said, as France reported a 74 per cent increase in the number of offences against Jews last year and Germany said the number of violent anti-Semitic attacks had surged by more than 60 per cent.

France’s interior ministry said this week that recorded incidents of anti-Semitism rose to 541 last year from 311 in 2017, while the German government said offences motivated by hatred of Jews hit a 10-year high of 1,646 in 2018. Physical attacks rose from 37 to 62, leaving 43 people needing medical treatment.

The French president, Emmanuel Macron, denounced the trend as “unacceptable”, telling ministers that anti-Semitism in France was “a repudiation of the Republic and its values”. Petra Pau, an MP for Germany’s Die Linke party, said more and more people felt free to “deny the Holocaust and engage in anti-Semitic agitation”.

In the largest ever survey of Jewish anti-Semitism opinion, addressing more than 16,000 Jewish people in 12 European countries, the EU’s Fundamental Rights Agency said at the end of last year that anti-Semitic hate speech, harassment and an increasing fear of being recognised as Jewish were becoming the new normal.

“Decades after the Holocaust, shocking and mounting levels of anti-Semitism continue to plague the EU,” the FRA director, Michael O’Flaherty, said. “Jewish people have a right to live freely, without hate and without fear for their safety.”

The report found 90 per cent of respondents felt anti-Semitism was growing in their country and 30 per cent had been harassed. Over a third avoided going to Jewish events or sites because of safety fears, while the same proportion had considered emigrating. Nearly 80 per cent no longer reported minor incidents because they thought “nothing would change”.

A 28-nation EU Eurobarometer poll released last month revealed a widening gulf between public perceptions of anti-Semitism and those of the Jewish community: while 89 per cent of Jewish people polled said anti-Semitism had “significantly increased” over the past five years, only 36 per cent of the general public felt it had.

Another major recent survey of public attitudes for CNN found more than a fifth of the 7,000 people polled in seven countries believed Jewish people have too much influence in finance and politics, while 34 per cent felt they knew little or nothing about the Holocaust - even if 32 per cent still thought Jews exploited it to “advance their position”.

A combination of factors seem to be to blame. In the past two decades, anti-Semitic attacks in Europe have generally peaked in line with tensions in the Middle East. “They were essentially the Israeli-Palestinian conflict, imported,” said Marc Knobel, a historian at the Crif umbrella group for France’s Jewish organisations. “Rather than attacking Israelis, people went for Jews.”

But since early last year, said Frederic Potier of the French government’s anti-racism and anti-Semitism body Dilcrah, more traditional forms of anti-Semitism have re-emerged. “We are witnessing the resurgence of a virulent, far-right identity politics that does not hesitate to put its beliefs into action,” Potier told Le Monde.

Knobel said the taboos around anti-Semitism “had all but disappeared”, pointing to the re-emergence of longstanding anti-Semitic tropes involving Jews and money. In France, for example, he told Liberation, the fact that Macron previously worked for the Rothschild merchant bank had “fuelled a load of rumours”.

Experts describe a “perfect storm” for anti-Semitic attacks combining the increasing influence of far-right groups and governments; the rise of conspiracy theories about a supposed global Zionist plot (and the scale on which they circulate on social media); and a general increase in the violence of public discourse.

Although the most recent rise in anti-Semitic incidents in France began before the emergence of the anti-establishment gilets jaunes (yellow vests) movement, some have occurred during their weekly Saturday demonstrations. A recent poll suggested nearly half of yellow vest protesters believed in a “Zionist plot”.

Alternative fur Deutschland’s (AfD) Alexander Gauland described the Holocaust as a “small bird dropping in over 1,000 years of successful German history”. AfD party has been widely accused of fomenting hate against refugees, Muslims and Jews.

A large influx of mostly Muslim refugees and migrants to Germany from 2015 has also led to a rise in anti-Semitic attacks by migrants from Arab states, although figures show an overwhelming majority of violence against Jews is perpetrated by far-right supporters. “Militant rightwing extremists are now openly calling for the desecration of Jewish institutions and attacks against Jewish people,” Pau said.

In CNN’s recent survey, 42 per cent of Hungarians polled said they thought Jews held too much sway over the worlds of finance and international affairs. While an average of one in 10 Europeans said they personally had an “unfavourable attitude” to Jews, the figure rose to nearly 15 per cent in Poland and 19 per cent in Hungary.

The European council late last year adopted a declaration urging all EU members to increase their efforts to “prevent and combat all forms of anti-Semitism”, as well as “assure the security of Jewish communities, institutions and citizens”.

But the bloc’s Fundamental Rights Agency said a “wave” of anti-Jewish hate crime was threatening “the very values on which the union was built”.

After swastikas were daubed this week on portraits on Paris postboxes of Simone Veil, the late French Holocaust survivor and politician, Jean Veil, her son, told RTL radio that “at bottom, we knew the leprosy was still there”.–Guardian