House manager says case against US president is ‘overwhelming’ 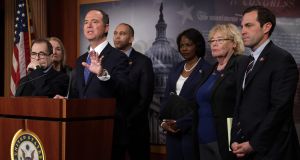 One of the prosecutors in Donald Trump’s impeachment trial insisted on Sunday that “the country’s fate is hanging” on the outcome of the showdown now taking place in the US Senate, in which she declared the case against the president regarding his conduct with Ukraine to be “overwhelming”.

Zoe Lofgren, a California congresswoman and one of the senior Democrats presenting the evidence against the president for abuse of power and obstructing Congress, said senators trying the case needed to agree this week to hear additional witnesses and evidence in order to provide the “impartial justice” that America depends upon.

Trump is accused of pressuring Ukraine to investigate his domestic Democratic political rivals, especially 2020 election candidate and former vice-president Joe Biden, and has refused to allow his most senior aides to testify in the process, despite court challenges by the Democrats in the House, who initiated the impeachment process last September.

“It’s for the senators to find out all the information I think they would want,” Lofgren told CNN’s State of the Union politics programme on Sunday morning.

“But here’s the thing: the chief justice of the United States [John Roberts] presiding over this trial, if he signs a subpoena for a witness to come, we’re going to get that witness – promptly. We’re not going to be in court for three or four years.

“We have a great hope that the senators will do the duty that they are obliged to do, that they’ll take the oath that they took seriously, that they will do impartial justice. That’s what our hope is and I think the country’s fate is hanging on it.”

Mitch McConnell, the Republican Senate majority leader, has fiercely resisted calls for witnesses to appear at the Senate trial, including John Bolton, Trump’s former national security adviser who has called the meddling of Trump’s lawyer Rudy Giuliani in Ukraine matters, seemingly at the president’s orders, as “a drug deal”.

“I think they’re deathly afraid of what witnesses will have to say and so their whole strategy has been deprive the public of a fair trial,” he said on NBC’s Meet the Press.

House Democrats accuse Trump of orchestrating a corrupt scheme in Ukraine to assist his re-election campaign. The president’s defence team decries the impeachment on principle and accuses Democrats, in turn, of using it as a tactic to “interfere” in the 2020 election.

Schiff added on Sunday: “What was so striking to me was that they basically acknowledge the scheme, they don’t really contest the president’s scheme. They just try to make the case that you don’t need a fair trial here, you can make this go away.”

Meanwhile,Lofgren defended comments by Schiff after he was blasted by Trump in a tweet on Sunday, where Schiff had quoted a CBS report claiming that Republicans’ heads could be “on a pike” if they went against the White House and voted for witnesses – a move that enraged moderate Republicans that Democrats had been hoping would support them in the push for more witnesses.

Lofgren said. “I can’t believe the president’s misbehaviour would be ignored because of something like that.”

Schiff added that he considered Trump’s comment that Schiff has not “paid the price, yet, for what he has done to the country”, a threat. “I think it was intended to be,” he told NBC’s Meet the Press.

Trump also went on Twitter early on Sunday to repeat his complaint that: “The Impeachment Hoax is a massive election interference the likes of which has never been seen before.” The tweet castigated his accusers as “Radical Left, Do Nothing Democrats”.

Trump’s legal team opened an aggressive defence of the president in the Senate on Saturday, laying out their case that he broke no laws, and insisting that the trial was merely an attempt to reverse the 2016 election.

Democrats say Trump abused his power to strong-arm Ukraine into conducting an investigation against Joe Biden, the frontrunner for the Democratic nomination in November’s election, and obstructed Congress by withholding testimony and documents from their inquiry.

Trump’s lawyers will resume their arguments on Monday.

Trump ally and Republican senator Lindsey Graham said on Fox News’ Sunday Morning Futures programme that he planned when the impeachment trial was over to investigate freshly the activities of Joe Biden in relation to his son Hunter Biden’s past employment on the board of Ukrainian gas company Burisma.

“We will do oversight of the Bidens to give the vice-president the scrutiny the president has had,” he said, despite theories of corruption relating to the Bidens and Ukraine having previously been debunked.

The US temporarily withheld $400 million in military aid to Ukraine, while Trump was pressuring Ukrainian president Volodymyr Zelenskiy to investigate his rivals. The aid was released in September, in a sequence of events that followed an intelligence community whistleblower formally complaining about Trump’s conduct involving the aid and interactions with Zelenskiy.