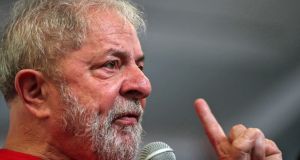 Efforts by former Brazil president Luiz Inácio Lula da Silva to avoid prison and return to power were dealt a severe blow on Wednesday when an appeals court upheld his conviction last July for corruption.

At the time of writing, two of the three-member judicial panel in the southern city of Porto Alegre hearing his appeal had voted to endorse the ruling of lower court judge Sérgio Moro in the case involving a beach-side apartment. The third judge Victor Laus was expected to vote later with his two colleagues.

The decision means Lula now falls foul of Brazil’s “clean record” law, which bars anyone whose conviction has been upheld on appeal from holding public office, throwing into doubt his ability to contest presidential elections in October.

Though suffering from high levels of rejection, Lula consistently tops opinion polls, with about a third of voters backing him in what is considered one of the most open presidential races in decades. His Workers Party has vowed to launch his candidacy regardless of Wednesday’s decision while he appeals his case to higher courts in Brasília.

Without Lula on the ballot, Brazil’s left risks being reduced to a political also-ran in the absence of the leader who for decades has been its principle vote-winner.

João Pedro Gebran Neto, the judge handling the case for the panel, not only upheld the decision of Judge Moro but voted to increase Lula’s sentence for money-laundering and passive corruption to 12 years and one month from the original nine years and six months.

In accepting that Lula had received the apartment at the centre of the case as part of a bribe, he described the former president as the “guarantor of a bigger scheme whose objective was the financing of political parties”.

The case against Lula stems from the investigation of a multibillion-euro corruption scheme inside state oil giant Petrobas. He is also a defendant in five other corruption cases and under investigation in a further three.

Leandro Paulsen, the second judge to give his ruling, followed his colleague in accepting the case made against the former president by federal prosecutors and also voted to increase the sentence. But he argued Lula should only be detained once the defence had exhausted its right to seek clarification from the court on Wednesday’s ruling.

Lula accompanied the court session at the headquarters of the union where he first rose to political prominence in the 1970s in Greater São Paulo. Questioned by reporters, he claimed he was calmer than the judges hearing his appeal and said if condemned “there is a lot of time ahead to expose the mistake and lies told”. He was due to speak at a rally of supporters in the city after the judgment in Porto Alegre concluded.

A crowd estimated by organisers at 30,000 demonstrated in support of Lula near the courthouse and there were scattered protests and roadblocks across the country.