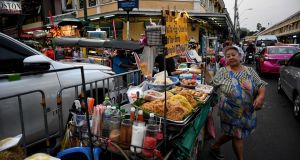 A street vendor pushes her noodle stall in front of the popular tourist street of Khaosan Road in Bangkok. Photograph: Lillian Suwanrumpha/AFP/Getty Images

Thailand could be the next nation in southeast Asia to relocate its capital after prime minister Prayut Chan-o-cha hinted such a move could be a “possibility” under his government.

Taking inspiration from neighbouring Myanmar and similar plans being formulated in Indonesia, the Thai prime minister suggested that relocating the capital could help Bangkok overcome its mounting urban challenges.

During an address at the Connecting Thailand with the World Conference on September 18th, the retired army general floated two options for a potential move. “The first is to find a city that’s neither too far nor too expensive to move to,” he said, “The second is to move to outer Bangkok to reduce crowding.”

The Thai prime minister suggested that moving the government to the outskirts of Bangkok could help ease traffic flows and reduce the need to commute in and out of the city centre.

Comprehensive research and studies into the social and economic impacts of such a move would be required, he added, but noted that such a move could be a “possibility” under his government.

The suggestion comes weeks after Indonesian president Joko Widodo announced the administrative capital would be moved from beleaguered Jakarta to East Kalimantan, or Indonesian Borneo.

Studies have also been conducted on shifting government offices to Chachoengsao, an agricultural hub to the east of Bangkok.

As with Jakarta, the idea of moving the capital has drawn mixed reviews, and doubts about whether such a plan would materialise.

Thosaporn Sirisamphand, from Thailand’s National Economic and Social Development Council, told the Bangkok Post the prime minister was yet to ask the agency to seriously study the possibility, and that his recent suggestion may have been an on-the-cuff remark.

“Capital relocation is a big issue and needs serious co-operation from various agencies,” he said. “I think General Prayut just threw an idea out to the public on how to tackle traffic congestion in Bangkok.”

According to a 2018 study on the world’s worst traffic, Bangkok was ranked eighth, one place behind Jakarta, for its road congestion levels, with Mumbai first.

Experts have suggested the government should first conduct studies on ways to reduce traffic congestion in Bangkok, and focus on development in second-tier provinces. – Guardian