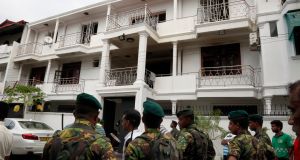 Security personnel stand guard where three colleagues were killed during the search of a house owned by magnate Mohamed Yusuf Ibrahim, father of two of the suspected bombers, in Colombo. Photograph: MA Pushpa Kumara/EPA

Inshaf and Ilham Ibrahim were part of the Sri Lankan elite. Sons of a spice tycoon, they spoke fluent English and Inshaf’s copper factory on the outskirts of Colombo was thriving.

But the two men were living a double life. On Easter Sunday, they were part of the group of suicide bombers who killed more than 250 people – a toll reduced from 359 after the health ministry cited confusion in counting body parts – in a wave of synchronised attacks on churches and luxury hotels.

The attacks have raised difficult questions about Sri Lanka’s ability to handle the terrorist threat. Indian intelligence had warned Colombo of an imminent attack in a detailed report, which was followed by increasingly urgent calls.

They have also shown that even wealthy and prominent members of the community can fall prey to radicalisation.

Those who knew the Ibrahim family are in disbelief. “They were polished,” said one businessman whose sons played with the Ibrahims when they were boys. “They didn’t look as if they were radical. I can’t imagine that they would do something like this.”

Now their father, Mohammed Ibrahim – an intimate of senior Sri Lankan politicians – is in police custody and his multistorey white villa is a crime scene. The building is wrapped in yellow police tape after Inshaf’s pregnant wife detonated her explosives killing herself, her children and the police officers who had come to search the house.

Sri Lanka remains in a state of emergency and a nationwide night-time curfew is in place. Colombo’s streets, lined with fluttering white mourning ribbons, are patrolled by the military and police, as authorities hunt for six more suspects. Hundreds of Muslims have fled their homes for safety in mosques fearing reprisal attacks.

The US ambassador to Sri Lanka, Alaina Teplitz, has warned that “the terrorist plotting is ongoing” and the FBI and UK counterterrorism police are assisting the investigation.

Hashim, who was known to Indian intelligence agencies for vitriolic social media posts, appeared in a video released by Islamic Stae – also known as Isis – after the attacks, serving as a reminder of the global threat posed by the group despite the destruction of its caliphate in Syria.

Sri Lankan defence officials have confirmed that most of the bombers were from the country’s prosperous Muslim community, which accounts for fewer than 10 per cent of the population but is prominent among industry leaders in the majority Buddhist country.

“Those who have means and time, only they can afford to procure materials for mayhem like this,” said Animesh Roul, a south Asia counterterrorism expert at the Society for the Study of Peace and Conflict, a New Delhi-based think tank. “Isis has inspired extremist groups and individuals in Bangladesh, India, Sri Lanka and the Maldives. It has immense influence over the local radicals and we have seen devastation.”

The government’s response has been mixed. Security forces have worked to defuse communal tension and politicians have called for restraint. Yet mudslinging continues in parliament as authorities refuse to accept blame.

The deep rift between prime minister Ranil Wickremesinghe and President Maithripala Sirisena, who also serves as defence minister, following an attempted coup in October last year, has contributed to a breakdown in the workings of the government.

Hemasiri Fernando, the top defence ministry official, resigned on Thursday evening, but was defiant to the end. “I have disseminated the information I received and carried out my responsibility, however, certain officials and relevant departments have not acted accordingly, and as a result we had to face this terrible tragedy,” he said in his resignation letter.

While the investigation proceeds, some in Sri Lanka are worried whether the country’s vital tourism sector, which accounts for 5 per cent of the island’s $86.5 billion economy, will ever get back to normal. The US and UK have both issued travel advisories to their citizens.

“Before the attack, hotel occupancy was about 75 per cent, now the occupancy has come down to less than 10 per cent, and most of those guests are journalists,” said M Shanthikumar, the president of Colombo City Tourist Hotel Association. “It’s incredible, it’s hundreds of millions of dollars lost,” he said. “It will take a long time to forget the whole thing.” – Copyright The Financial Times Limited 2019