Fortune-tellers, clairvoyants across country already ‘organising’ the heavens for clients 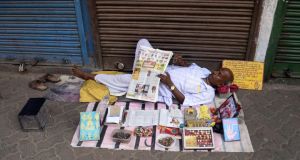 Hundreds of Indian “godmen”, astrologers and soothsayers are dusting off their cosmic calendars and honing their star-reading skills to help local politicians prevail in the forthcoming general elections.

Renowned for delivering electoral successes, this army of fortune-tellers and clairvoyants spread across the country have already begun “organising” the heavens for their clients from a cross-section of parties participating in India’s seven-stage polls, beginning on April 11th.

These politicians will be contesting 543 Lok Sabha or elected lower house seats, the outcome of which will be announced on May 23rd.

Many politicians will not eat, travel or hold public meetings until their “celestial minders” declare the moment propitious.

The greater the uncertainty and insecurity, the more people consult astrologers

Even their clothing while campaigning will be astrologically colour-coded.

“There is hardly any Indian politician who does not consult a bank of astrologers or Tantric priests to deliver electoral success” said New Delhi’s well known astrologer Suresh Chander Misra.

These astrological minders determine not only the exact time these politicians must file their nomination papers, but also when to launch their campaigns, he added.

Failure to follow their advice could spell electoral disaster, or so the politicians believe.

Astrology, palmistry and occultists are something all Indians grow up with, and the influence on their lives is either subtle or overt.

The majority have “Janampatris” or horoscopes, which are a complex grouping of Sanskrit symbols and geometric diagrams – prepared on the basis of date, place and exact time of birth, aided by ancient logarithmic charts that detail planetary movement.

For many this document significantly influences their existence, and is frequently referred to throughout their lives in an effort to sidestep bad times and to augment the good.

“The greater the uncertainty and insecurity, the more people consult astrologers,” said astrologer and yogic healer Pankaj Khanna. But none are more susceptible to this than Indian politicians, the Delhi-based astrological consultant added.

It is also well known that newly elected governments take the oath of office on “auspicious days” and at the time chosen by astrologers after consulting the stars, at times even holding up affairs of state simply because it is inopportune.

And once they assume office, ministers chose their office rooms in accordance with ancient “Vaastu Shastra”, the Hindu equivalent of the Chinese Feng Shui or science of architecture and buildings.

This takes into account all energy fields for enhanced wealth, prosperity and success.

These incumbent politicians also change their wall colours, upholstery design and even rearrange their office furniture as directed by their spiritual gurus.