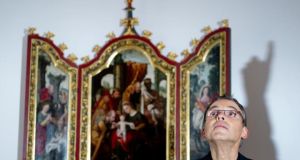 Franz-Peter Tebartz-van Elst: the bishop made world headlines two years ago when details of a €30 million renovation project for the bishop’s palace were revealed. Photograph: Boris Roessler/EPA

Franz-Peter Tebartz-van Elst, the so-called “Bishop of Bling” who was removed from the diocese of Limburg in Germany because of his lavish spending on the bishop’s palace, is to be appointed to a new position in the Pontifical Council for Promoting the New Evangelisation, according to Rome-based website Vatican Insider.

Bishop Tebartz-van Elst (55) made world headlines two years ago when details of a €30 million renovation project for the bishop’s palace were revealed by a German church-commissioned report. Among the items of lavish expenditure it revealed were works of art, chapel windows, built-in cupboards and also a two-seater bathtub costing approximately €20,000.

The bishop had excused himself by saying he was much more a theologian than an architect, adding that he had been keen to see that the restoration of the period palace be done properly. At the time of his “resignation” from the diocese in March of last year, a Vatican statement had said that, in time, another job would be found for him.

Given that it would have proven difficult to appoint the bishop to another German diocese, it seems that a low-key role has been found for him at New Evangelisation, headed by Archbishop Rino Fisichella. In theory, his new job title will be “delegate for catechism teaching”, or the study of the relevance of church teaching to the New Evangelisation.

It remains to be seen what, if anything, Pope Francis will make of the arrival in Rome of this most non-Francis style prelate.

1 Former Kilkenny hurler dies after bike struck by tractor
2 Green Party’s Catherine Martin confirms she will stand against Eamon Ryan
3 Nine more deaths from Covid-19 recorded in Ireland along with 24 new cases
4 Unlocking Ireland: What exactly will happen in reconfigured phase two on Monday?
5 Hundreds protest outside US embassy in Dublin over George Floyd death
Real news has value SUBSCRIBE