Another Irishman appointed to senior post at the Vatican

Bishop Paul Tighe becomes secretary to the Council for Culture 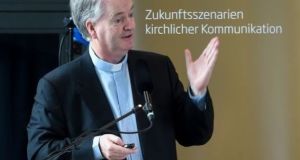 Bishop Paul Tighe: has been appointed secretary to the Council for Culture in the Vatican

Irish cleric Bishop Paul Tighe has been appointed secretary to the Council for Culture, one of the more senior posts at the Vatican.

He moved to the Vatican from Dublin 10 years ago when he appointed secretary to the Council for Communications there in 2007.

In September last year, Cardinal Kevin Farrell took over as prefect of the Vatican’s new Council for the Laity, Family and Life, and received the red hat there in November last year.

His older brother Bishop Brian Farrell is secretary at the Vatican’s Council for Promoting Christian Unity, within which he is also vice-president of its Commission for Religious Relations with the Jews. Both men grew up in Dublin’s Drimnagh.

Last April, it was announced that Msgr John Kennedy had been appointed to head the disciplinary office of the Vatican’s Congregation for the Doctrine of the Faith (CDF).

From Clontarf in Dublin, he has been working with the CDF since 2003. Ordained in 1993, he worked in Crumlin and Francis Street parishes before entering service at the Vatican in September 2002.

In 2004, he was named director of the communications office at the Dublin archdiocese and set up its Office for Public Affairs in 2005.

Bishop Tighe was congratulated by Archbishop of Dublin Diarmuid Martin when news of his latest elevation was annonced.

Born in 1958, Bishop Tighe attended school in Navan, Co Meath before completing his secondary education at Summerhill College, Sligo. He graduated from UCD in 1979 with a degree in civil law and studied for the priesthood at Clonliffe in Dublin and the Irish College Rome before his ordination for in 1983.