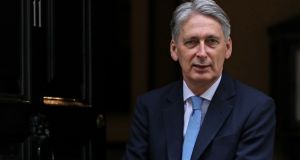 Chancellor of the exchequer Philip Hammond told the Commons on Thursday the UK government will fund abortions for women coming to have them in England from Northern Ireland. Photographer: Chris Ratcliffe/Bloomberg

The UK government has announced a major concession to give Northern Irish women access to terminations on the NHS in Great Britain, in an attempt to head off a damaging Tory rebellion at a vote on the Queen’s speech.

Dozens of Conservative MPs were understood to have expressed to Tory whips their support for an amendment by the Labour MP Stella Creasy to allow Northern Irish women access to NHS-funded abortions in Great Britain. It was due to be voted on this afternoon.

And Chancellor of the Exchequer Philip Hammond told the Commons that the government would fund abortions in England for women from Northern Ireland.

Women from Northern Ireland are currently charged about £900 for a termination if they travel to have the procedure in mainland Britain, a policy upheld by a supreme court case earlier this month.

Downing Street said that the estimated annual cost of funding abortions in England for women from Northern Ireland was around £1 million, but added: “We are committed to funding in excess of this if required to meet the commitment.”

The calculation was based on a figure of 724 women travelling for abortions last year, said a spokeswoman. Travel costs are not expected to be covered.

Northern Ireland has some of the most restrictive abortion laws in Europe and it is almost impossible for a women to have an abortion legally there.

In a letter to MPs outlining the new funding, the education secretary and equalities minister, Justine Greening, hinted she had personal sympathy with the issue. She wrote: “As minister for women and equalities, I share the concerns of many colleagues about the experience of women from Northern Ireland obtaining an abortion through the NHS in England.”

Greening said that the Equalities Office would fund the payments for the terminations with additional funding for health services. “This will mean no English health service user is disadvantaged as a result of this change,” she wrote. “Funding for the services will be made available through the government Equalities Office, allowing the Department of Health to commission services in England for those from Northern Ireland.

“The supreme court judgment made clear that we have the power to make these arrangements. The government’s position continues to be that we want to see safe abortion services provided for women who may need them - within the bounds of the law.”

On Thursday morning, the leader of the house, Andrea Leadsom, had signalled a concession was imminent, telling MPs the Department of Health and the Equalities Office were discussing the issue.

The Creasy amendment to the Queen’s speech, which would force a change in the law if carried, was selected by the Speaker to be put to a vote on Thursday afternoon.

The proposed amendment came as three appeal court judges in Belfast have refused to change the law in Northern Ireland to allow for abortion in cases where a woman is pregnant through rape or where the pregnancy is doomed due to fatal foetal abnormality.

The court said abortion reform should be left to the Stormont assembly, as it ruled that the law was compatible with existing provision.

It said the complex moral and religious questions behind the issue should be determined by a legislature rather than a court.

The judgment overturns a previous one by Mr Justice Horner, who ruled 18 months ago that the ban on abortion in cases of rape and fatal foetal abnormality was incompatible with the European convention on human rights.

The former Conservative equalities minister Maria Miller had expressed her concern in the Commons. “It’s wrong that women in Northern Ireland don’t have the same access to abortion as women in England, Wales and Scotland, ” Miller said. “When will the government be making a statement to show how this wrong will be put right?”

Ms Leadsom said she was pro-choice, calling the abortion funding “an incredibly sensitive and important” issue. “To be very clear, it is my personal view that every woman should have the right to decide what happens to her own body. That is very clear,” she said.

It was understood Labour whips would not instruct the party’s MPs to vote in favour of the Creasy amendment, but would allow a free vote because abortion is considered a conscience issue.

The amendment was signed by more than 100 MPs across the House of Commons, including the Conservative MP Peter Bottomley, Liberal Democrats, Scottish National party MPs and the Green party co-leader Caroline Lucas.

“Parliament has an opportunity today to turn concern about inequality into real action for change. For too long our Northern Irish women have been denied a basic right,” Creasy said. “Members across the house have told me they agree this is wrong. Today is our time to end this injustice.”

Conservative MPs who sympathised with the amendment faced a dilemma, as many would have been unwilling to vote for an opposition Queen’s speech amendment that would signal no confidence in the government.

In the Queen’s speech debate on Wednesday, the health secretary, Jeremy Hunt, said there was a consultation about the change - which MPs later said they had not been informed about. “I agree that all women, in all parts of the United Kingdom, should have the same rights to access healthcare,” he said.