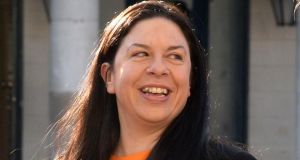 Tanya Ward, chief executive of the Children’s Rights Alliance: its report criticised the performance on homelessness, rights of Travellers and Roma children and mental health, among other areas. Photograph: Dara Mac Dónaill

The Government’s performance on children’s rights is “barely acceptable” with little or no positive impact on their lives, a new report states.

The Children’s Rights Alliance, publishing its annual report card identifying serious issues for children, noted the Government had only been in power since May 2016, but criticised its performance on homelessness, the rights of Travellers and Roma children and on mental health.

Chief executive of the alliance Tanya Ward said in the report that, overall, it was a “mixed bag” for children with “no outstanding achievements quite yet”.

The organisation welcomed the proposed Affordable Childcare Scheme, saying it would be a major step forward. This area was awarded a “B” grade, the highest in the report this year.

Childminding and quality in early childhood education were given a “C” grade by the alliance, while diversity in schools was awarded a “D”.

The organisation said that, while it welcomed the Government’s ambitious target to transfer 18 new schools a year from religious patronage, only 10 such schools had opened since 2012.

Free access to GP care by 363,694 children under six was another development that was welcomed by the body.

But it said mental health, an area which has never been given more than a “D” grade in the report in recent years, fared no differently this year.

The Children’s Rights Alliance said the remit of the Youth Mental Health Taskforce was narrow and it was disappointing it did not address some of the most serious issues for young people, including long waiting lists.

It noted there were over 2,080 children on the waiting lists of the Child and Adolescent Mental Health Services in September 2016 and that, of these, 170 children had been waiting more than a year.

Speaking at the launch of the report in Dublin, Ms Ward said the Government was being awarded an overall “D+” grade, which was a drop in the grade awarded in recent years.

She said some key commitments had stalled and needed a push to get them over the line.