System remains unavailable to students outside capital and other foreign nationals 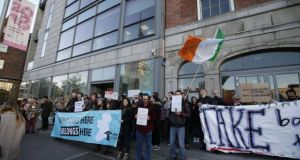 Foreign students studying in Dublin will no longer have to visit the visa registration office in person when renewing their permission to reside here and instead can complete the process online, the Department of Justice has said.

The Government announced on Monday a new online visa renewal system for non-EEA students based in Dublin, saying it was hoped the process would offer “greater certainty to applicants that their permissions will be renewed on time”.

Under the system, students must complete their renewal form online, upload copies of supporting documents, pay the applicable fee and then submit their passport and current Irish Residence Permit (IRP card) by post.

Previously, Dublin-based students had to secure an appointment online and then present in person at the Irish Naturalisation and Immigration Service (INIS) office on Burgh’s Quay to renew their papers.

While the online application process will offer some relief to foreign students in the capital, the system remain unavailable to students living outside Dublin or other foreign nationals seeking to renew visas.

The department said it would keep the system under review with the intention of rolling it out to other applicants in the coming months.

Foreign nationals, including students, have repeatedly criticised the Government in recent years for its poor online appointment system which has seen numerous unregulated operators block booking slots which they then sell on at a profit. Before the pandemic, applicants said it had become near impossible to secure a slot on the Government website with many handing over sensitive personal data to third parties in order to get an appointment before their visa expired.

In a statement, Minister for Justice Charlie Flanagan acknowledged that applicants had “historically experienced difficulties in obtaining an appointment” but said the new process would allow officials to process visa renewals “more efficiently”.

The new online system will also “relieve pressure” at the Dublin visa registration office at Burgh Quay which, when it re-opens, will focus exclusively on first time student registrations, said Mr Flanagan. The Burgh Quay has been closed since March as part of Covid-19 restrictions.

English language students stuck in Ireland because of the pandemic are allowed to remain here as long as they re-enrol in an online course for the remainder of the academic year, under measures introduced by the Government in late May.

An estimated 1,000 foreign language students were left thousands of euro out of pocket following the outbreak of the Covid-19 pandemic, with many living in overcrowded settings and with no means of securing an income because of the closure of so many pubs, restaurants and shops.

The ELSU has called for all international students and workers in Ireland to be granted a year’s extension to their visas and fees paid for in-person classes to be returned.

“It is incumbent upon Ireland, as we prepare for our seat on the Security Council, to lead by example and issue the refunds and visa extensions that will stop this hidden humanitarian crisis unfolding within our own shores,” said Mr Ó Luain in a letter to the International Organisation for Migration.