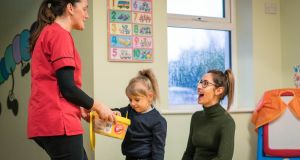 Anita Flynn, manager at Happy Feet Childcare, Castlerea, with Anna Boronski and daughter Alicia (4): Ms Boronski’s husband asked his employer to change his hours so he could look after their children in the mornings. Photograph: Keith Heneghan

“The childcare sector has reached a boiling point now, and the insurance really put the icing on the cake,” says Anita Flynn, manager of Happy Feet Childcare in Castlerea, Co Roscommon.

Flynn is just one of many childcare workers and providers striking on Wednesday to draw attention to the challenges facing their sector. They claim that a lack of State funding and skyrocketing insurance costs are putting a strain on both staff and parents.

The Early Years Alliance, the umbrella group that organised the strike, is urging the next government to deliver “a new model of childcare” in Ireland.

The strike action comes less than two months after childcare providers, including Happy Feet, were hit by the withdrawal of insurance company Ironshore from the market. Many were left scrambling for quotes just before Christmas, with most facing a significant increase in costs.

Ten years ago, when she set up Happy Feet Childcare, Flynn’s insurance was “hardly anything” , but it has gradually been on the rise over the last few years.

In December, Flynn was quoted €3,880 for her insurance, a significant jump from the €980 she paid the year before. She ultimately got that quote down to €2,685 by joining membership organisation Early Childhood Ireland and she paid an additional €1,120 for insurance on an after-school club.

“It kind of ruined my Christmas, to be honest. I was so anxious waiting for the quote. I was telling [the staff], ‘Oh my God, I don’t even know if I’ll be able to reopen in January,’” Flynn says.

She also recently learned her insurance would not cover the summer and Easter camps she has been running for the last number of years.

“It’s not that I’m making millions out of an Easter camp, I’m doing it to keep the staff,” Flynn says.

“If I don’t have work for the staff, they have to go and sign on and they don’t want to do that either.” Now, if she decides to run camps over summer and Easter, she will have to pay even more money to her insurance provider.

Despite rising costs, Flynn has so far avoided increasing prices for parents.

“I’d feel so sorry for parents that are out hard working every day and then have to give over half their salaries to me,” Flynn says

Anna Boronski (40), originally from Poland but living in Castlerea, is one of the parents struggling to cope with the cost of childcare. Last year, she and her husband were paying €155 per week for their daughters Maya (6) and Alicia (4).

After half a year, they had to re-evaluate. Her husband asked his employer to change his hours so he could look after their children in the mornings. Their childcare costs have since come down to €60 per week.

“I don’t know if it’s a better position because I don’t see my husband as much. I see him for maybe half an hour at eleven o’clock at night. It’s hard,” says Boronski.

Joanne Flanagan (40) from Castlerea pays a total of €210 per week between Happy Feet and a private childminder. Their childcare costs are higher than their monthly mortgage repayments.

Despite this, Flanagan feels that she is in “a lucky position” as she is a primary school teacher, meaning she has long holidays and can have her school-going child educated where she teaches.

“For ordinary working parents, it must be a nightmare. They need childminders during the summer and everything. It’s a second mortgage,” she said.

Flanagan would like to see the next government introduce better supports for families who have more than one child. She also wants to see greater investment in childcare services in rural areas, pointing to a lack of facilities for children under the age of three.

“They’re all great at promising things before the election but once they get in, they forget about the promises,” Flanagan said.

Early Childhood Ireland is calling on the next government to increase investment in the sector to 1 per cent of gross domestic product by 2025. It also want a new agency for early years and school age childcare and reform to the Early Childhood Care and Education Scheme (Ecce).

Their proposals have received “strong cross-party support”, according to Frances Byrne, director of policy with the organisation.

But only time will tell if the next government will heed the concerns of increasingly dissatisfied childcare workers and parents.