If law is passed, employers will have to publish data on pay for men and women 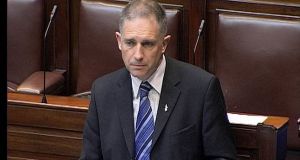 Minister for Equality David Stanton: more measures are needed to increase the number of women in better paid roles.

A Bill to compel employers to publish data on their gender pay gaps received Cabinet approval on Tuesday, but more measures are needed to increase the number of women in better paid roles, Minister for Equality David Stanton has said.

The general scheme of the Gender Pay Gap Information Bill, published by Minister for Justice Charlie Flanagan after it received Cabinet approval, will compel employers with a certain number of staff to publish information on the gender pay gap in their firm.

In addition to differences in hourly pay, information on differences in bonus pay, part-time pay and pay of men and women on temporary contracts will be among the data that must be published.

The regulations may also require publication of differences in pay by reference to job classifications.

The enforcement mechanisms include a power for the Irish Human Rights and Equality Commission to apply to the Circuit Court for an order requiring an employer to comply with the legislation.

Also, an employee of the employer concerned may apply to the Workplace Relations Commission for an order requiring compliance.

There is a provision too for designated officers who would investigate a sample of employers to ensure that the information published is accurate.

Mr Stanton said the “important measure” would help reduce the gender pay gap by “furnishing a deeper insight into the causes of the gap and facilitating employers in addressing it”.

“It is not by itself a sufficient response to the problem of the gender pay gap and needs to be supplemented by measures to increase the number of women in better-paid roles and occupations, improved childcare provision, dealing with gender stereotypes, more women in decision making etc,” he said.

Mr Flanagan said: “We want gender equality in Ireland and we are committed to tackling the gender pay gap. These pay transparency measures are part of a wider package of measures to promote gender equality.”

The general scheme of the Bill will now be submitted to the Joint Oireachtas Committee on Justice and Equality for pre-legislative scrutiny.