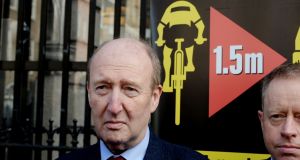 Minister for Transport Shane Ross has said the Government must learn from the David Drumm case and ensure no bonuses are paid to bankers working in banks controlled by the State.

“We mustn’t allow that culture to get any oxygen again,” he told Newstalk Breakfast.

Mr Ross also criticised top civil servant Robert Watt after he suggested that people with free travel should not use public transport during peak hours.

Mr Watt, secretary general of the Department of Public Expenditure and Reform Robert Watt said there was a need for a debate on how infrastructure, including public transport, was priced and used. Public transport is increasingly full between 7.45am and 8.25am, Mr Watt said, adding that there are “issues about enabling people to access public transport for free at peak times”.

Mr Ross said the comments were “ over the line”.

He added: “Older people deserve this right. His rhetoric was very strong and very condescending.”

The Minister said that the idea of not allowing people with free travel passes use them during peak hours “was not on.”

He said that Mr Watt “had to be slapped down” by his “own” minister, Paschal Donohoe, a move he supported.

However, Mr Ross said that calls for Mr Watts to be sacked were over the top. “I think Robert Watt is a very able person. In his own area he has done the State a great deal of service.”

If Mr Watt was interested in politics and forming policy then he should run for office, added Mr Ross.

On the issue of compensation for people who have to allow part of their garden be used for widened roads to enable bus corrideors,, Mr Ross said the situation was regrettable, but that unpopular decisions have to be taken some times. Some compensation would be necessary, he said.

The National Transport Authority has said it will compulsorily purchase gardens and other property, if necessary, to construct its €2 billion high-speed bus routes in Dublin.

The decision would be taken for future radial routes which could halve bus times, he said.

And finally, when asked about a suggestion by disgraced FIFA boss Sepp Blatter that Ireland should join forces with the UK to bid to host the World Cup, Mr Ross said the proposal would be examined carefully, but that he would not indulge “in unrealistic fantasies”.