Most households will not pay for utility under report recommendations 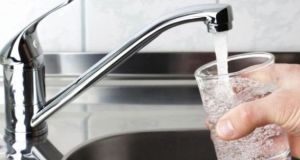 The report of the expert commission on the funding of water services is to be published on Wednesday.

Anti-water protesters should ‘polish their protest boots’ and get ready to start campaigning after Christmas, Anti Austerity Alliance People Before Profit TD Mick Barry has said.

He was speaking after it emerged that most households will not pay for their domestic water service under recommendations contained in an expert report on the charges.

The report of the expert commission on the funding of water services is to be published on Wednesday but details emerged last night.

Chaired by the former chairman of the Labour Court Kevin Duffy, it is expected to include a number of funding options in its recommendations, including generous domestic allowances which would effectively scrap water charges for most families.

It is understood that general taxation would be used to fund this water supply and only those using excessive amounts would be charged.

Mr Barry also said that there should be an amnesty for people who have not paid water charges and a refund for those who did. Waste should be tackled, but not by way of water charges, he told RTE’s Today with Sean O’Rourke show.

He also called on the public ‘to put enormous pressure’ on Fianna Fáil public representatives as the political party’s support will be important to the government’s plans on water charges.

Mr Barry said the provision of water should be equal for urban and rural dwellers. “The basic cost should be covered by the State through general taxation.”

Rural dwellers who supply their own water should be able to apply for a subsidy from the government.

He warned that ‘vested interests’ will oppose this, but that the public will not accept this. “Let the government tremble.”

The report, once published on Wednesday, will be referred to a special all-party committee of 20 members chaired by Independent Senator Pádraig Ó Céidigh.

That committee will be expected to make recommendations to the Oireachtas on the report’s findings by March.

Mr Ó Céidigh’s appointment prompted a protest in the Dáil last week from members of the AAA-PBP alliance, giving a foretaste of the difficulties this large committee is likely to have in reaching consensus on the issue.

Water charges were suspended for a period of nine months pending the completion of the expert group’s report, and the deliberations of Mr Ó Ceidigh’s committee.

Minister for Housing and Local Government Simon Coveney has assumed responsibility for the Government’s approach to this issue. When water charges were suspended it led to a shortfall of €300 million in Irish Water’s income which is being met through an increase in public subvention and in savings.

Meanwhile, a Government briefing paper prepared in advance of the expert report has raised substantial doubts over any constitutional protection for a water utility.

The seven-page document also strongly defends the retention of a national water utility even if water charges are dropped.

It also says that if charges are dropped “money would have to be found from somewhere” to allow for future investment in water infrastructure.

The briefing paper, which has been seen by The Irish Times, focuses on a possible referendum to enshrine the public ownership of water infrastructure into the Constitution.

Because of its minority status the Government did not oppose the Second Stage of a Private Members’ Bill brought forward by the Opposition to hold a referendum which would give constitutional protection to water services when it came before the Dáil last week.

However, the briefing paper prepared for Ministers by the Department of Housing and Local Government sets out a number of “complexities” and difficulties which could be perceived as opposition to a referendum to protect water services in the Constitution.

It sets out the “potential adverse implications” of such a move for group water and other private schemes, saying that it could have unintended consequences. They would include an impingement on individuals’ constitutional rights to private property.

The paper has also pointed out that if water services were to be given constitutional protection it would be the only utility to have it. That might set a precedent for others, with the potential for further referendums on other utilities.

The briefing paper has also set out recent developments that, it has argued, underline the need for a single national utility.

They include the east and midlands region drinking water supply project which will involve providing water from sources other than the river Liffey for the population of greater Dublin in the future.

With 40 per cent of the population living in the region, the spare water capacity of the capital is currently at around 8 per cent, below the median for other European cities which ranges from 10 per cent to 15 per cent. At times the spare capacity of Dublin has fallen to 2 per cent.

“It would be simply impossible to progress a project of this scale and scope under the previous local authority system,” the document says.

In the event of water charges being dropped completely, the paper says funding for water services and investment will have to be found somewhere.