Country before Crozier for Catholic Kenny

In recent months, the Taoiseach has been at the business end of a severe bludgeoning, but he hasn’t flinched 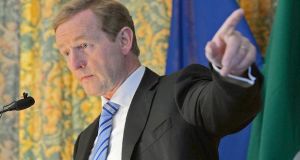 Never mind the belt of one – just the cold draught from an upward swing was once enough to cow entire governments. Not any more.

In recent months, Enda Kenny has been at the business end of a severe bludgeoning, but he hasn’t flinched. If anything, pressure from the bishops – which they are entitled to exert – has merely served to strengthen his resolve.

People talk about the Taoiseach’s capacity to surprise, yesterday’s remarks from him in the Dáil being an apparent example of this. Yet Enda has been nothing if not consistent in his approach to dealing with the highly contentious Protection of Human Life during Pregnancy Bill.

His determination to uphold the separation between church and State had already become a feature of his tenure before the abortion question came centre stage.

There was no change in Enda’s attitude when Mattie McGrath tried to convince him to rethink his commitment to stewarding through this long overdue piece of legislation.

We shouldn’t have been surprised. In a little over two years as Taoiseach, Enda Kenny has notched up an impressive number of “defining” moments and “finest hours”, the latest one coming out of the blue during Leaders’ Questions yesterday morning.

The political nerds went scurrying for their history books when the Taoiseach uttered a phrase destined for the history books of the future.

“I am proud to stand here as a public representative, as a Taoiseach who happens to be a Catholic, but not a Catholic Taoiseach,” he told the Dáil, invoking the shades of devout leaders past who pledged allegiance to faith first and country second.

On an otherwise uneventful Wednesday morning in Leinster House, Kenny, without any fuss, laid down a milestone in Irish political history.

Furthermore, a Taoiseach stood in the Dáil chamber and called out the despicable behaviour of a small section of Irish society that deems it acceptable to threaten and intimidate elected representatives who do not cleave to their world view.

The House listened in silence as Enda put on the record the sort of treatment he and many of his Coalition colleagues have been subjected to ever since his Government resolved to legislate for the X case.

“I am now being branded by personnel around the country as being a murderer; that I’m going to have on my soul the death of 20 million babies. I am getting medals, scapulars, plastic foetuses, letters written in blood, telephone calls all over the system, and it’s not confined to me . . . ”

Many of the deputies behind him nodded in agreement. Enda was speaking for them too. “We’re all getting those too,” said Independent TD Finian McGrath, who had very pointedly left his seat beside Mattie McGrath and moved to another place before Mattie began to read his script.

A number of Fine Gael deputies who have expressed their reservations about the Bill looked on in dismay.

But what was most noticeable was the reaction of most of Enda’s backbenchers, the majority of whom have maintained an uncomfortable public silence in the face of a vocal cohort of colleagues shouting long and loudly against the Bill.

“I am a Taoiseach for all of the people – that is my job, while I have it. I am proud to lead the Government in governing for all our people – all our people – irrespective of the sector of society that they come from,” declared their leader.

“Hear, hear!” they shouted. “Well said.” This was quite a departure for the Dáil.

And was it the first time – we think it was – when certain women’s voices were raised in the House on the issue, as deputy McGrath pressed his charge that the Taoiseach is legislating for the introduction of abortion.

“The right of the unborn is a basic human right. It is the most fundamental right of all,” said McGrath.

“What about the woman?” shouted Mary Mitchell O’Connor – a question repeated by Marcella Corcoran Kennedy and Heather Humphries, among others.

Mattie urged him to put the question to the people in a referendum. Enda replied that the Government had to legislate for the X case and that is what they would do. The nation had already voted twice on the issue and “confirmed and re-endorsed the constitutional rights of women in this country to have a termination of a pregnancy in specific circumstances.”

Do it again, urged Mattie, drawing snorts of derision with his speculative “third time lucky”.

It was as if the Taoiseach’s sense of duty to his office had emboldened those TDs who previously appeared reluctant to publicly express their views.

“Who wrote your script?” they asked McGrath.

“Circulate it!” bellowed Bernard Durkan, resplendent in his seasonal cream summer suit. And like the sound of the first cuckoo of spring, the Opposition gave forth that familiar cry that heralds the onset of a Dáil summer: “It’s the man from Del Monte!”

This briefly lifted the mood.

But not for a despondent Mattie McGrath, who was getting no comfort from Enda. The conservative Catholic schoolteacher from Mayo stood by his sense of duty and doing his duty on behalf of all the people.

There was spontaneous applause from many on the Fine Gael side, most of the Labour deputies and a large majority in Sinn Féin and Independent ranks.

Another departure for a cautious Dáil. Yet no real surprise from consistent Kenny. From what we’ve come to know of the man, yesterday’s performance was par for the course.

Could it be that after all these years, the novelty value of a Taoiseach taking a stand and sticking to it is still a wonder to behold?