Oireachtas to table Bill on goods from illegal Israeli occupations 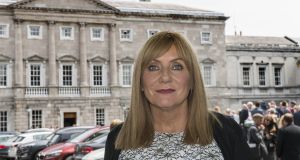 A Bill that seeks to outlaw the purchase of goods or services produced in places occupied by Israel illegally under international law is to be introduced in the Oireachtas before the end of the year.

The Occupied Territories Bill, the draft of which was approved on Tuesday by the Oireachtas Legislative Drafting Service, is to be introduced by Independent Senator Frances Black, who is hoping eventually to win full cross-party support.

The Bill targets trade and any other economic activity relating to territory defined as occupied under international law. At present, goods exported to the European Union from territories illegally occupied by Israel – which include the West Bank and Golan Heights – amount in value to approximately €100 million a year and include fruit, plastic garden furniture and soda stream dispensers.

Ms Black disclosed details of the Bill at a conference on Tuesday in Dublin organised by Sadaka, which campaigns for Palestinian rights. A Sinn Féin MLA present, Pat Sheehan, said his party would support the Bill.

Senator Ivana Bacik of Labour said she had one or two drafting issues with it but these were easily solved and she would be urging her party to support it.

Senator Colm Burke of Fine Gael said he supported a ban but wanted to see the Bill for himself and, if he agreed with it, would urge his party to support it.

Senator Mark Daly of Fianna Fáil said he would support a ban, if done on an EU-wide basis.

The conference, which was held in the Royal College of Physicians of Ireland and attended by about 60 people, heard strong testimony from several speakers on what they termed the apartheid nature of Israel and legalised discrimination against Palestinians.

As evidence, she cited the Israeli state practice of applying Israeli law to the residents of illegal settlements in the occupied territories and military law to the Palestinians whose land has been stolen for the settlements.

In East Jerusalem, Palestinians had an official status of “permanent resident”, which meant they could be removed whenever the occupying power decreed, but this status was not applied to Jewish settlers. Palestinian refugees were expressly denied a right of return to their land “which is expressly apartheid”, she said.

Dr Mustafa Barghouthi, a Palestinian human rights and peace campaigner, said it made no difference which party was in power in Israel because all supported Zionism, the movement that supports the idea that Israel is the land as defined in religious texts, including the Bible.

Systematic and institutionalised discrimination was practised against Palestinians in the occupied territories. Palestinians paid twice as much as settlers for water and electricity, he said. “This is going on now,” he said. “This humiliation is happening today.”

He showed videos of a young Palestinian man in a green T-shirt and with his hands tied behind him being shot by an Israeli soldier at almost point-blank range, of dogs being set on peaceful protesters, and of a soldier smashing his rifle into the face of a man who was not threatening him in any discernible way.

Peaceful resistance was met by Israeli violence and he urged people to support the boycott, divestment and sanctions (BDS) campaign. “BDS is a very legitimate form of sanction,” he said. “It is a very effective way of struggle because it translates into international solidarity.”

Dr John Reynolds of NUI Maynooth said legitimate occupation was benign and temporary (as happened in Germany and Japan at the conclusion of the second World War). Israeli occupation was belligerent and permanent, he said.

The Israeli attorney general ruled recently that it was legal to take land from Palestinians to create a road into an illegal Israeli settlement. But under international law, he said, “it is absolutely prohibited to acquire territory by military force”.

Israeli governments argue that occupation is legal and that the BDS movement is essentially an expression of anti-Semitism. “I don’t know how we can be anti-Semitic,” said Dr Barghouthi, “when we are Semites ourselves.”