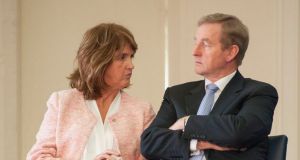 In the end it’ll be blamed on the media.

The media made him do it.

Due to the frenzy of speculation whipped up by journalists, it was impossible to get any meaningful work done. They had created such forward momentum that it was impossible to overcome. The task of running the best small country in the world in which to do dithering had become unworkable. Therefore, in the best interests of the country, there was only one option and that was to go to the country in November.

Anything can be explained. A formula of words devised. Last-minute solutions found and implemented.

So if Enda wants a general election in November, he can have it.

“Noonan’s mad for November” a Government backbencher confided on Fridday. “But he hasn’t a great record himself with elections. If he gets this one wrong, he won’t get his wish to stay on as Minister for Finance for another two years. If they’re forced to go in with Fianna Fáil, Micheál Martin will swipe his job.”

The Labour Party, meanwhile, has finally calmed down after throwing a monumental strop because the Taoiseach appeared to be going off the idea of a 2016 date. With the Tánaiste leading loudly from the front, Joan Burton and some of her troops were beginning to sound desperate as they pleaded with Enda not to throw them to the wolves.

Sensibly, they’ve steadied the ship. And Burton has softened her stance, accepting that naming the election date is the Taoiseach’s prerogative.

But until Enda Kenny drops the Sphinx-like performance and makes a definitive statement on the question, the near-hysteria that took hold in the corridors of power this week will continue.

“If he doesn’t clear this up by the weekend we’re definitely looking at November,” a jittery Labour TD told us.

If that’s the case, Labour nominee Maíria Cahill won’t get a chance to become a senator. The election to fill Jimmy Harte’s seat is on November 13th – Cahill can’t lose as she also has the backing of Fine Gael TDs and Senators. However, if the Dáil is dissolved before that date there won’t be any election as there will no TDs to vote.

Sinn Féin and Fianna Fáil have both indicated they will be putting forward candidates. They won’t have a chance but they’ll be able to get some publicity out of the venture.

Fianna Fáil told us the party hasn’t chosen its candidate yet. Senator Paschal Mooney begged to differ in the Seanad on Tuesday. “I wish to put on record that it is the intention of the Fianna Fáil party to present the electorate with a candidate about whom I am very pleased,” he declared.

But a party spokesman hadn’t the foggiest who that might be, despite Paschal putting Fianna Fáil’s intention on the record.

Meanwhile, the printers are rolling and the posters are arriving.

We’ve seen two already – poster boys John Whelan (Labour) and Jim O’Callaghan (Fianna Fáil) are ready for action. O’Callaghan’s poster is moody and stylish, with the brooding Dublin Bay South candidate standing in twilight trying to look like a well-brought-up Bond villain beside the slightly menacing tagline: “Ready when you are, Mr Kenny.”

Senator Whelan, kicking off his campaign with a rally in O’Loughlin’s hotel in Portlaoise featuring guest speakers Rúairí Quinn and Maíria Cahill, has a more conventional poster.

Labour’s posters aren’t as screamingly red as past efforts and Whelan has bucked head- office instructions by refusing to wear the obligatory red tie and dark suit for his shot.

Finally, contrary to reports, Seanad cathaorlach Paddy Burke is not retiring. It seems one of his colleagues, Senator Terry Brennan, told a packed Dáil members bar on Wednesday night that Mayoman Paddy is hanging up his gavel.

“There’s only one way out of this place – to die or be beaten” he said cheerfully.

Dublin’s Temple Bar Company is marking the 25th anniversary of the area’s redevelopment next month with a festival of arts and politics.

The political side of the celebrations will have added spice if Taoiseach Enda Kenny decides on a November election – the festival is running over the weekend of November 19th-21st.

Such a scenario would bring back some unpleasant memories for Noel Dempsey, chairman of the Temple Bar Company. The former Fianna Fáil minister didn’t contest the last election, which saw the party’s vote collapse after a shambolic retreat from power by a government in tatters.

Speakers will include the usual suspects – sorry, a host of deep political thinkers and speakers such as Micheál Martin, Lucinda Creighton, Mary O’Rourke, Catherine Murphy and Eamon Ryan.

We have studied the publicity literature and – thank God! – there is a role for the political anoraks’ anorak, Noel Whelan. He’s chairing a debate on November 21st in the Temple Bar Studio and Gallery snappily titled: “The tyranny of the whip and party politics is ended and good riddance.”

We don’t know if the organisers have a contingency plan in the event of a general election, when the politicians and pundits may be required elsewhere for permutation and prognostication duty.

Perhaps Dempsey could assign the vacant slots to himself, remembering what Brian Cowen did in those chaotic final days when he had to assign multiple portfolios to his remaining few ministers who hadn’t resigned.

“I cannot think of a more fitting way to celebrate this milestone in the story of Temple Bar,” says Dempsey.

“The area has always been involved in a mix of politics and the arts. Some will say there has been too much of one and far too little of the other. This event will celebrate both.”

There will be “pop-up debates” over the weekend in various pubs and restaurants, because it wouldn’t be Temple Bar without a pop-up something.

Other topics up for discussion include “The future of the city – managing change and transformation” with added Frank MacDonald; and “Gender quotas: a lazy way to a more representative democracy or an absolute necessity to change our political culture?”

And there’ll be queues around the block to get into “Stop banging your head against a brick wall – politicians just don’t care about culture – cultural policy is never going to be either a keystone of any government manifesto or a significant vote-winner – an Irish perspective.”

Details can be found on the Temple Bar Company’s Facebook page.

It seems things have settled down in Dublin Central following the selection of serial candidate Mary Fitzpatrick to contest the general election for Fianna Fáil. It was a stormy convention, with one of the two candidates ruling herself out of the race before the process began. Denise McMorrow – reportedly the choice of the Bertie Ahern crew in the constituency – attacked the party’s gender quota policy before bowing out to leave the field clear for Fitzpatrick.

This turn of events leaves the Drumcondra mafia at something of a loose end. The politically shrewd members of Ahern’s famous election machine won’t be wearing out their shoe leather on Mary’s behalf, but life will be very dull for them if they don’t have a runner to root for in the general election.

Happily, the lads have moved on from Dublin Central. But Fianna Fáil’s leader in the Seanad, Darragh O’Brien, mightn’t be too happy about it.

Darragh is hoping to return to the Dáil after his stint in the Upper House and is tipped to take a seat in the new Dublin Fingal constituency. However, he discovered this week that his running mate has some heavy-duty supporters helping with her campaign.

We hear he was somewhat taken aback when Lorraine Clifford arrived at a routine candidate meeting in the Carnegie Court Hotel in Swords on Thursday in the company of Bertie’s long time lieutenant Chris Wall.

Solicitor Clifford is a long-time member of Fianna Fáil’s powerful Ard Chomhairle, but apart from one unsuccessful run for Dublin City Council she is relatively new to electoral politics.

The same can’t be said for Wall, who has seen it all in the course of his long association with the former taoiseach. As canvassing demarcation lines and the like were discussed, Chris treated the meeting to the benefit of his considerable expertise in matters electoral, gleaned in the course of his labours for “the other fella below in Drumcondra”.

O’Brien, who described himself as a protege of former Fianna Fáil deputy GV Wright when he entered the Dáil in 2007, was fit to be tied. We’re not sure if another leading light of the Drumcondra mafia was in attendance, but if Chris was there, Paddy the Plasterer won’t have been too far behind.

Clifford, who lives in Portmarnock with her husband, Mail on Sunday political journalist John Lee and their baby daughter Kitty, won’t be in a position to do much door-to-door canvassing if a snap election is called. She recently broke her foot and is hobbling around on crutches.

1 Tyrone midwife on the cover of Vogue magazine
2 Pubs reopening will not mean ‘fellas having a few pints and peanuts’, Holohan warns
3 Donald Trump is in trouble, and that could spell very bad news
4 ‘White Irish people have never had to think about this’
5 Trump’s claim it was a ‘great day’ for George Floyd is criticised
Real news has value SUBSCRIBE