How the referendum campaigns unfolded 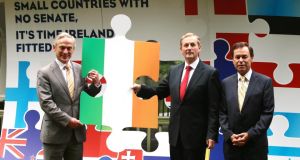 2011: Fine Gael election manifesto promises to call a referendum to abolish the Seanad.

April 11th, 2013: Former tánaiste and attorney general Michael McDowell attacks the Coalition proposal to abolish Seanad Éireann, deriding it as a “cheap stunt by which all political power will be concentrated in the hands of Government”.

April 27th: Fianna Fáil leader Micheál Martin tells his party’s ardfheis to urge voters to reject the proposed abolition of the Seanad, portraying the move as a “major power-grab by Government”.

April 30th: The Government approves plans for a referendum to allow the setting up of a Court of Appeal via an amendment to Article 34 of the Constitution. Minister for Justice Alan Shatter said the need for this arose mainly from a “significant” backlog of cases at the Supreme Court.

May 27th: The Government rejects the demands of political campaigners to include an option of reforming the upper house. The Cabinet approves the heads of the referendum Bill.

May 27th: A new group Democracy Matters calls for a No vote in the Seanad referendum. Its members include historian Diarmaid Ferriter, former Minister for Justice Michael McDowell and ex-Senator Joe O’Toole. They accuse the Government of a “power-grab”.

June 11th: The Seanad is brought into sharp focus following a claim in the Upper House by Fianna Fáil Senator Marc MacSharry that Taoiseach Enda Kenny was “acting like a clown”.

June 13th: Taoiseach Enda Kenny tells the Dáil abolishing the Seanad will save an estimated €20 million annually in running the Oireachtas. On the same day, Richard Bruton is named Fine Gael’s director of elections.

July 15th: As tensions begin to rise in the Upper House, Independent Senator David Norris draws criticism after accusing Fine Gael TD Regina Doherty of “talking through her fanny” on the issue of abolition.

July 24th: The Seanad decides by 33 votes to 25 for legislation to allow a referendum on whether to abolish or retain the Upper House.

July 26th: Sinn Féin says it will call for a Yes vote in the referendum to abolish the Seanad, saying it is “elite” and “out of touch.

September 2nd: Fianna Fáil leader Micheál Martin says the referendum on the abolition of the Seanad is a “defining moment” for the political future of this country.

September 11th: Alan Shatter says he is “profoundly concerned” at the lack of coverage RTÉ has given the upcoming referendum on the establishment of a court of appeal.

September 16th: The Government’s arguments for creating a Court of Appeal are “somewhere between incoherent and incomprehensible”, constitutional lawyer Seth Barrett Tillman says.

September 17th: Taoiseach Enda Kenny rejects what he describes as a “political attack” by Fianna Fáil leader Micheál Martin who attacked Mr Kenny for his refusal to debate the Seanad referendum on the airwaves and described his style as disingenuous and dictatorial.

September 20th: Retired registrar to the Court of Criminal Appeal Bernard Neary says it is wrong to make taxpayers pay for a new court during an economic crisis without first attempting to ease delays with existing resources.

September 26th: The Law Society writes to all 9,000 solicitors in the State urging them to vote Yes in the Court of Appeal referendum.

September 27th: Chief Justice Susan Denham says the four-year backlog at the Supreme Court is an “unsustainable situation” with untold costs for society and the economy – but stops short of advocating any particular vote in the referendum.

September 28th: The Bar Council calls for a Yes vote in the Court of Appeal referendum, describing the proposal as “an essential step” to address serious delays in the Supreme Court.

September 28th: Taoiseach Enda Kenny tells RTÉ he will not be taking part in a televised debate on the Seanad referendum.

September 29th: Six former government ministers have call on voters to support the abolition of the Seanad. They are Alan Dukes and Gemma Hussey (FG), Des O’Malley (FF and PD) and Barry Desmond, Mervyn Taylor and Liz McManus (Labour).

September 30th: The Master of the High Court Edmund Honohan says the proposed Court of Appeal is unnecessary, describing it as a “crude device” that will lead to a rise in appeals.

October 2nd: The four main parties jointly call for a Yes vote in the referendum on a Court of Appeal.

In an unusual move, senior figures from Fine Gael, Labour, Fianna Fáil and Sinn Féin issued a statement urging voters to approve the proposal to create a court between the High and Supreme courts.

October 2nd: The Government suffers an embarrassing defeat in the Seanad just two days before the referendum to scrap the Upper House.