Hillary Clinton hails women in North as ‘agents for change’ 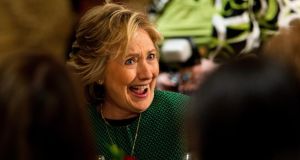 Hillary Clinton after being inducted into the 2015 Irish America Hall of Fame in New York in recognition of her role and commitment to the Irish peace process. Photograph: Andrew Gombert/EPA

Former US secretary of state Hillary Clinton hailed the role of women in bringing peace to Northern Ireland but, noting the disagreements between the political parties over welfare reforms, said the process was not finished.

Speaking at an Irish-American event, Ms Clinton, who is expected to seek the Democratic presidential nomination in 2016, said the talks between Sinn Féin and the DUP on the reforms were a “great reminder” that political parties should never give up trying to find agreement.

“As dysfunctional as government can be anywhere in the world, it is better to have people arguing about that than walking away and thinking that conflict might be the only answer,” she said.

The former first lady was inducted into the Irish America Hall of Fame, an honour bestowed by Irish America magazine and its New York-based publisher, Niall O’Dowd.

Addressing an audience that included Sinn Féin president Gerry Adams, who sat at the top table with her, Ms Clinton traced the peace process back to the decision by her husband Bill, then US president, to issue a visa to Mr Adams in 1994.

“Absent that first step, that first risk, we might not have had the momentum to move forward to get to the Good Friday accords and all that has followed,” she told 300 people at the sold-out luncheon.

The event drew a heavy US media presence, given the expectation that Mrs Clinton, the favourite to be the 2016 Democratic presidential candidate, might announce her candidacy in the coming weeks.

Minister for Arts Heather Humphreys attended the lunch in place of Minister for Foreign Affairs Charlie Flanagan following the death of his mother. She thanked Ms Clinton for supporting the process “when peace was not the inevitable outcome” and for “listening to the voice of women to soften the hard politics of division”.

She said it is not possible to bring peace and security to people “just by signing an agreement”, and the women of Northern Ireland helped bring peace to people’s everyday lives.

“Where the work of peace permeates down to the kitchen table, to the backyard, to the neighbourhood, around cups of tea, there is a much better chance that the agreement will hold,” she said.

She praised women such as Inez McCormack and Joyce McCartan for being “unstoppable leaders” who helped demand “an end of violence” and who “would not take no for an answer.”

“I have seen this in many places around the world, where women moved from being victims to being agents for change, but I have never seen it more clearly, more resolutely than I saw it in Northern Ireland,” she said.

Mrs Clinton described the event as “kind of like a family reunion” and name-checked Irish-American friends in the audience. She was presented by Mr O’Dowd with a baby’s Irish woollen jumper embroidered with shamrocks for her five-month-old granddaughter Charlotte, Chelsea’s daughter.