Government expected to nominate man and woman for European Commission 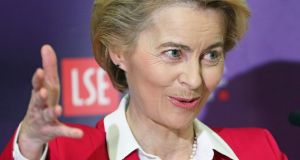 The Government is expected to nominate two candidates to replace Phil Hogan as on the European Commission.

Government discussions have been taking place this Tuesday on the potential Irish nominee to replace Mr Hogan.

The Government will forward the names of a man and a woman to Ms Von der Leyen who will then decide who gets to become commissioner.

It is understood the names have not yet been finalised but Tánaiste Simon Coveney and MEPs Mairead McGuinness and Frances Fitzgerald have expressed interest in the position.

Ireland will hope to hold onto the commissioner for trade portfolio. The position was held by Mr Hogan until he resigned in the wake of the Oireachtas Golf Society dinner controversy.

2 Is Ireland ready for the Covid-19 vaccine?