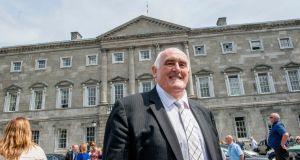 US-based Galway Senator Billy Lawless has been forced to let go over 500 employees as the family’s restaurant and bar businesses in Chicago close for the duration of the Covid-19 pandemic.

Four years ago, he became the first Irish citizen living in the US to be appointed to the Seanad as a campaigner for emigrant voting rights, but he is unable to vote in the Seanad elections because strict rules require the opening of ballot papers to be witnessed by designated officials in Ireland.

Speaking from his home in downtown Chicago at the weekend Mr Lawless said restrictions there are effectively a “carbon copy” of what is happening in Ireland.

Efforts to contain the pandemic meant a shutdown of the family’s six businesses. “We closed the restaurants on Monday week last. We laid off, with all the restaurants and the families involved, over 500 staff.

“It’s terrible. All these are married with kids and mortgages,” he said.

“And our income has stopped dead. We’re not doing takeout because we’re too big. Most of the restaurants are big operations,” Mr Lawless added.

He also expressed regret that he could not vote in the Seanad elections and said it was ironic that “my wife Anne and daughter Clodagh are alumni of NUI Galway so they vote for the National University of Ireland nominations unsupervised and I have to be supervised”.

By law Senators and TDs who vote in the Seanad elections must have the opening of their ballot papers witnessed by either the clerk of the Seanad or Dáil or their assistant clerks, or by a local authority or Garda Superintendent.

In a bid to vote, he asked Irish Consul General in Chicago Brian O’Brien to act as witness. “We videoed it. He said that he was witnessing me open my ballot papers, and I’m now going to vote and he stamped the envelop, not the papers of course that I voted on with the Consul General’s stamp, but it was unacceptable.”

He said “I knew it was a long shot because in fairness to Clerk of the Seanad Martin Groves, he tried every avenue, but statute does not allow for me to vote” except under the supervision of the clerks, or a Garda Superintended or the local council.

The Senator, who moved to the US in 1998 added: “The irony of it. I am co-founder of votingrights.ie for citizens living abroad”, which campaigned for the referendum to allow citizens abroad vote in the presidential election.

He said restrictions in Chicago were like in Ireland except that they can go further than 2 km from their homes for exercise.

On Friday Mayor of Chicago Lori Lightfoot “went ballistic” after young people ignored social distancing rules and gathered in groups to play basketball. They were gathering on the beaches as well.

“Now all the lakefront, beaches and public parks are closed. Everything is closed except the essentials,” said Mr Lawless.

Chicago is ahead of the pandemic curve, he added, “but they’re expecting 40,000 cases in the next three weeks in Chicago and there’s just no hospital beds, there’s no equipment. It’s terrible.”

The Senator said he was really upset not to be present for the last sitting day of the 25th Seanad. But “it was a great four years and it was an incredible honour to be there. It’s meant an awful lot to us Irish emigrants abroad.”

But he added that “I’ll be back to clear up my office and see what the new Seanad brings”.