Would a united Ireland see everyone together, standing tall? 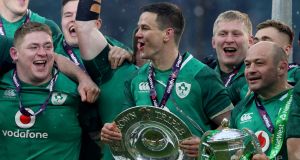 Unlike other sporting bodies, the IRFU stayed together after partition, but the anthem issue always rankled with players from an Ulster Unionist background, leading to Phil Coulter writing Ireland’s Call. Photograph: Bryan Keane/Inpho.

Ireland’s Call will never be anybody’s favourite song, but it’s a noble example of the compromises a united Ireland would involve, and it does have at least one outstanding virtue. It works.

The Irish rugby team, which will go into this year’s World Cup as one of the favourites, is itself a model for what all-island co-operation can achieve.

Unlike other sporting bodies, it stayed together after partition, but the anthem issue always rankled with players from an Ulster Unionist background, especially after 1987, when an IRA bomb meant for Judge Maurice Gibson also injured three northern rugby players heading south to play for their country.

After a farce at that year’s inaugural World Cup in Australia, when a bad tape recording of James Last playing The Rose of Tralee deputised for Amhrán na bhFiann, there was no anthem at all for Ireland’s only away game during the 1991 tournament. The IRFU then commissioned Phil Coulter to come up with something fans from both political traditions could sing.

His simple ballad has since suffered much scorn, some terrible singing, and many letters to The Irish Times. But it has gained a grudging acceptance. Now supporters from the “four proud provinces” belt it out with something like gusto, alongside the Soldier's Song when the team plays in Dublin, exclusively when they play away.

Coulter was a good choice for the job, being from a city whose very name divides its citizens and became one Northern Ireland’s many shibboleths, used by both sides as an identity marker. Here was the “narcissism of small differences” par excellence. But thanks to various local compromises, an uneasy peace prevails, while the “Derry-stroke-Londonderry” example, has spawned a humorous meme for similar resolutions of minor conflicts.

Where else might an agreed Ireland find common ground?

Well, there’s also the harp, which is both the Republic’s official State symbol and part of the British royal standard. In a country where even musical instruments can be politicised - fiddles tend to be Catholic and flutes Protestant, at least in mid-summer - the harp too might once have been forced to take sides.

But after the demise of the Gaelic Ireland, when Queen Elizabeth’s troops were ordered to “hang the harpers and burn their instruments”, harping was deliberately revived during the United Irishmen era, and by patriotic Belfast Presbyterians to boot. It has since become ubiquitous as a shorthand for Ireland, adoring everything from Ryanair planes to the pint of Guinness.

The harp’s unifying credentials remain impeccable and would surely feature as part of any new Irish flag. It wouldn’t even have to be the republican green. The existing Presidential standard has a gold harp on a background of blue, Ireland’s “other” official colour.

The shamrock would also remain a very important symbol in any new state, not least for the excuse it gives Irish politicians (North and South) to converge on the White House every March 17th.

The St Patrick’s Day parade may be contentious in Belfast, but unionist politicians have been happy to enjoy the red carpet treatment rolled out to all of Ireland - uniquely among the small nations of the world - in Washington every March.

Speaking of Washington, itself a compromise capital conceded by the yankee north to southern states, would Ireland also require a new political capital? It’s impossible to imagine Dublin ever being supplanted now as the island’s dominant city and the revival of Royal Tara is unlikely - it was hard enough to move the OPW to Trim - even if that were an acceptable compromise to Ulster.

But perhaps Áras an Uachtaráin would need to be relocated to Armagh, which managed to remain the ecclesiastical capital of Ireland throughout a century of partition and despite being at the centre of some of the Troubles’ worst events.

This is not to assume that the Áras would still have a president, of course. That question too would be on the table and unionists might well prefer to leave the residence in the Phoenix Park while reinstalling a Viceroy, or something similar.

In any case, symbols may be the easy part of an agreed Ireland. Elsewhere there would be a world of wrangling over questions of real power. Establishing a common foreign policy for the combined jurisdictions might be nearly as challenging as it is for all the countries of the EU.

Then there are the legal systems. Would they be unified, and if so how? And health? The existing Republic might happily adopt a British-style NHS overnight, but could a new 32-county state afford it?

What about the roads? For almost a century after the Border, there was no official agreement from both sides even about how many border crossings there were. It took Brexit for them to finally come up with a total: an astonishing 208, making this the most densely perforated international frontier anywhere.

On the plus side, that would be a lot of stitches holding the two sides of a reunited Ireland together while old divisions healed. But would careless drivers henceforth be breaking the speed limit in miles or kilometres? Would the fines be in euro of sterling?

These and a thousand other questions would have to be teased out before the agreed flag could be run up a pole for the first time, wherever that might happen.

1 Nphet signals strong opposition to parts of Government plan to exit lockdown
2 Helen McEntee defends role in appointment of Séamus Woulfe amid Dáil questions
3 400 – yes, 400! – Irish retailers for all your online Christmas shopping
4 Ireland could lose out as France lays claim to most of €5bn Brexit compensation fund
5 Q&A: What restrictions are going to be lifted next week?
Real news has value SUBSCRIBE