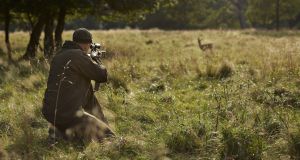 Once they have killed and gutted a deer, poachers mark the location with GPS for later collection. File photograph: Getty Images

Wildlife criminals, including deer poachers and gangs capturing wild birds for sale abroad, “are pillaging the countryside”, according to the senior garda who led a successful operation against deer poachers in Leinster five years ago.

Now, the Garda Síochána is preparing a new training course beginning in September for officers in a bid to tackle the gangs, according to Supt Martin Walker.

“There is a very low risk of being caught here in Ireland and the profits are quite strong,” said Supt Walker, who led the Garda’s anti-poaching Operation Bambi alongside the National Parks and Wildlife Service (NPWS).

The new Garda strategy was revealed at the launch of the Irish Deer Commission, a voluntary deer management and conservation group, in Co Laois.

Deer poachers are increasingly using infrared telescopic sights for night-time shootings in the mountains, which means they can “operate without being given away by lights”, Supt Walker said.

Once they have killed and gutted the deer, poachers mark the location with GPS for later collection. Returning the following day means they can collect the deer carcasses without carrying weapons.

Gangs can kill 10 deer in a night. A red deer stag can fetch up to €550. A Sika deer will fetch about €100. Hare poaching is becoming an increasing problem, he said, with the animals later used for illegal coursing.

Finching, the illegal capture of wild birds, is also growing. Bullfinches can fetch up to €150 and goldfinches can be sold for up to €50. Badger baiting is occurring more frequently, particularly in the midlands.

Saying that wildlife crime is causing fear in rural Ireland, Supt Walker said a Co Kildare farmer had his jaw broken when he challenged a group of men on his land.

Elsewhere, domestic animals have been shot and thoroughbred race horses were injured, he said: “Wildlife crime is worth €20 billion across Europe for criminal gangs and organisations.

After drug importation, firearms and human trafficking it is the highest income for criminal elements,” said Supt Walker, who added that prosecution under the 1976 Wildlife Act was complicated.

“We are trying to establish a core group of guards to challenge that type of behaviour. We have had three wildlife crime conferences, two by Rehabilitation Ireland and the National Parks ran one back in February. There are groups of individuals going around there and they are pillaging the countryside.

Some deer poachers do not shoot their prey. Instead, “more nefarious individuals, they are really bad criminals” are going out and “are literally setting dogs on these poor unfortunate deer,” causing great hardship, Supt Walker said.

A Garda inspector in each Garda division is now to work closely their opposite number in the district office in the NPWS. The training course will be led by a Garda Assistant Commissioner.