Unions to press for mid-term review of pay deal 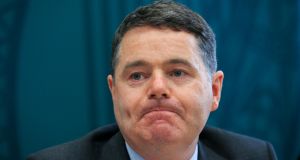 Unions representing hundreds of thousands of State employees are set to press for a mid-term review of the current public-service agreement which could open the way to higher or accelerated pay increases for staff.

The move follows on from the Government’s acceptance of Labour Court proposals aimed at settling the recent strike by nurses.

However, Minister for Public Expenditure Paschal Donohoe has warned unions against seeking “unaffordable” rises above those already agreed.

He said public service staff already had terms and conditions that were, “in truth, beyond what is available in many parts of the private sector”.

The recent nursing proposals – which would see nurses move on to a new enhanced pay scale with higher payments and greater numbers qualifying for additional allowances – are viewed by many trade union leaders as, at the very least, stretching the boundaries of the current public-service accord.

The acting secretary of the public-services committee of the Irish Congress of Trade Unions, Kevin Callinan, this weekend suggested a mid-term review of the existing public-service agreement could now be put in place. The €900 million deal is scheduled to run until the end of next year.

He said such a review would be one of a set of possible measures that could help maintain confidence of union members in the current agreement in the wake of the nurses’ dispute.

As public-service unions gear up for their annual conference season this week, Mr Donohoe warned that pursuing “unaffordable and unsustainable wage increases” beyond those already agreed would be an issue of “grave concern” . He said global economic conditions had deteriorated in recent months.

“Public servants in general benefit from two forms of pay adjustments, incremental progression up a salary scale and also general annual pay increases negotiated through pay agreements,” he writes in Monday’s Irish Times. “This contrasts to the private sector where pay has moved towards more individualised arrangements, where some do very well but many don’t.”

Mr Callinan said that since the accord was negotiated two years ago, the country had seen economic growth and inflation on a level that had not been anticipated at the time.

The current agreement provides for talks between the Government and unions in the event of a downturn in the economy, which had not been foreseen in the assumptions underpinning the agreement. Public-service unions, in the wake of the nurses’ settlement, appear to be suggesting that unanticipated increases in economic growth should also lead to the review being revisited.