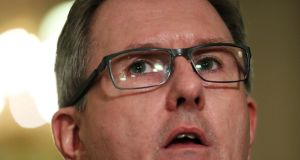 DUP’s Jeffrey Donaldson who called on the UK government to “withdraw these regulations, respect the fact that devolution has been restored”. Photograph: Brian Lawless/PA Wire

The UK government has said it remains legally obliged to introduce abortion services in Northern Ireland regardless of a motion passed in the North’s Assembly rejecting the “imposition” of abortion legislation enacted at Westminster.

“While I respect the Assembly’s right to state their position on this, it doesn’t have any bearing on the legal obligations which have been placed on us by parliament,” the Northern Ireland Office (NIO) minister, Robin Walker, told the House of Commons on Thursday.

He was responding to an urgent question from the DUP MP Jeffrey Donaldson, who called on the UK government to “withdraw these regulations, respect the fact that devolution has been restored and rather than seek to further undermine devolution allow the Northern Ireland Assembly its rightful place to legislate on its own abortion law.”

Abortion was decriminalised in Northern Ireland in October as a result of legislation passed in the UK parliament in the absence of a devolved government at Stormont.

Under the legal framework for access to abortion services published by the UK government, which became law on March 31st, abortion was to be made available in Northern Ireland without restriction until the 12th week of pregnancy.

Abortions are also available up until 24 weeks if the continuation of the pregnancy would involve a risk to the woman’s physical or mental health greater than that of termination, and with no time limit in the case of severe foetal impairment or fatal foetal abnormality, or if there is a risk of death or grave permanent injury to the pregnant woman.

However there have been delays in implementing the legislation, which have been compounded by the coronavirus pandemic.

On Tuesday a DUP motion in the North’s Assembly which “rejects the imposition of abortion legislation which extends to all non-fatal disabilities, including Down’s syndrome” was carried by 46 votes to 40.

Mr Walker said that while he recognised the debate, “unfortunately the motion that the Assembly debated and backed delivered proposed no solution which would deliver a CEDAW [Convention on the Elimination of All Forms of Discrimination against Women] compliant regime in this regard.”

However he said it was “in the hands of the Assembly to propose reforms and a way forward on this regulation, so long as they can do so in a way that is CEDAW compliant, and I would be very happy for them to take that opportunity.”

The UK government, he said, was clear that the “legal obligations remain in place on us to ensure that we have a human rights compliant model in every part of the UK, and that includes Northern Ireland.”

In a statement issued afterwards, Mr Donaldson said the regulations had been “foisted upon Northern Ireland when devolution was in abeyance” and the Assembly had “considered the regulations and rejected them on the basis of their discriminatory approach to unborn babies with non-fatal disabilities.

The Sinn Fein MLA Emma Sheerin said Tuesday’s motion had been put forward by the DUP to “undermine the entirety of abortion regulations and service provision” but “only referenced a small part of the legislation.”

“The end game for the DUP is to prevent any and all regulations and service provision being provided for,” she said.

“If this matter were to be returned to the Assembly, it is no secret that the DUP - who are opposed to abortion in any circumstances - would never legislate for the healthcare that women need and were denied for decades.

“We urge everyone involved to recognise the current failures in provision and to ensure that the regulations, as set out by the legislation, are implemented and properly funded by the Department of Health to provide a fully commissioned service across all five health Trusts,” she said.