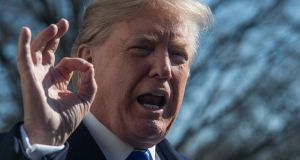 US president Donald Trump has accused the mainstream media of engaging in a ‘fake news’ campaign against him.

Trust in traditional journalism has rebounded while faith in social media platforms has fallen, according to a study by public relations firm Edelman.

The annual study shows that a significant majority (64 per cent) are concerned about “fake news”, and claims there is “a yearning” for journalism that provides “accurate, credible information”.

According to the study, a majority of Irish people believe that traditional journalists are meeting expectations in terms of investigating corruption (56 per cent), guarding information quality (54 per cent) and educating on issues (61 per cent).

“At a time when people are struggling with who and what to believe there is a notable rise in trust in journalism,” said Edelman managing director Joe Carmody.

“People’s trust in social media as a source of news is collapsing, leaving an opportunity for journalists and bona fide experts to inform society.”

In terms of the business world, trust in CEOs as a voice of authority increased by 14 points to 41per cent.

It also finds that businesses are now expected to be “an agent of change” with 63 per cent of respondents calling on CEOs to “take the lead” on change rather than wait for government to impose it.

Three quarters of respondents believe that producing high-quality products and services is the most important job for CEOs, followed by ensuring that the company is trusted (73 per cent) and has high ethical standards (66 per cent).

However, the study suggests a distrust of multinationals, and in particular companies headquartered in the United States where trust fell by 6 points.

According to the study, government is seen as the preferred institution to lead Ireland to a “better future” ahead of business and NGOs. Trust in government is also increasing year-on-year and now stands at 35 per cent.

Over the past five years trust in government has increased by 15 per cent, the largest increase of each of the four institutions during that period.

Manufacturing (61 per cent) and education (70 per cent) are the most trusted sectors, according to the study, with financial services (29 per cent) and automotive (44 per cent) the least.

The study also reveals that trust in industry sectors including technology, food and beverage, telecommunications, entertainment, automotive and consumer packaged goods declined over the past five years.