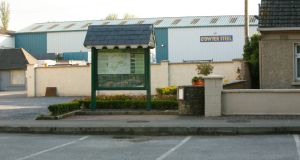 Chloe’s father brought her in the car as he travelled to work at O’Dwyer Steel in Dundrum, Tipperary on Thursday morning and left her when he parked outside. Photograph: Brian Gavin/Press 22

Staff at a Co Tipperary company where a baby girl died after being found in an unresponsive condition in a car held a silent vigil on Friday.

Seven-month-old Chloe Fogarty died after being found her father’s car on Thursday afternoon outside O’Dwyer Steel, where he worked in the village of Dundrum

On Friday evening, people placed flowers outside the premises where Paul Fogarty works, while others lit candles.

The death of baby Chloe Fogarty, only child of Louise and Paul Fogarty, has caused huge shock and sadness in the communities of west Tipperary, as well as provoking deep sympathy among people nationwide.

She was found critically ill in a car after 1pm on Thursday and is believed to have been in the car for several hours, as temperatures reached their highest point of the year to date in the area.

The baby will repose at her home in Tipperary town on Sunday evening and Mass of the Angels will take place at St Nicholas’s Church in Solohead on Monday, followed by a private burial.

A coroner’s inquest will be held into all of the circumstances surrounding the death. Chloe’s body will be released to her family after the postmortem examination in University Hospital Limerick.

It is reported that her father had brought her in the car as he travelled to work at O’Dwyer Steel in the village of Dundrum on Thursday morning and forgot to drop her off at creche. He realised after 1pm that his daughter was still in the vehicle and emergency services were called.

Paramedics worked on the seven-month-old at the scene, as did a local GP, and she was transported to the nearby Kickhams GAA club – about 12km from the town of Cashel – where she was airlifted to University Hospital Limerick. However, she was pronounced dead later in the afternoon.

Temperatures reached the mid-20s on Thursday in many parts of the country and the child may have suffered heatstroke while in the car.

Gardaí are investigating all the circumstances surround the death but have described it as a “personal tragedy” and a “very sensitive” case.

They have been liaising with the Fogarty family and will prepare a file for a coroner’s inquest that will take place later this year or next year.

Paul Fogarty is originally from the Golden-Kilfeacle parish, between Cashel and Tipperary town, and Louise Fogarty is from the Tipperary town area, where the couple were living. They have been described as popular, well-known and respected in their communities.

Parish priest in Golden-Kilfeacle, Fr Pat Coffey, said the entire community wants to support the family. “It’s just a case of shell-shock,” he said of the local reaction to the tragedy. “I know the extended family, it’s quite a big family. Everybody is feeling for them.”

Sinn Féin councillor Martin Browne described the incident as “pure tragedy” and called on the local community to support the family during this difficult period.