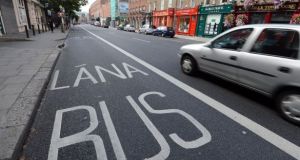 Dublin has the second highest transport costs in the world , according to a global survey of 55 major cities.

The average cost of a monthly public transport ticket in Dublin is €114.95, the Deutsche Bank research of 55 global cities suggests. By comparison a monthly travel pass in New York, the 5th most expensive city, costs €108.57.

Only London is more expensive than Dublin and is a complete outlier with an average monthly travel pass cost of €160.60.

Soaring accommodation costs has seen Dublin leap up the table of the most expensive cities to rent.

Even those figures do not tell the same story as the Deutsche Bank survey is denominated in dollars and the Euro has fallen by 20 per cent against the dollar in the last five years.

As a consequence net disposable incomes after rents saw Dublin fall eight places from 15th to 23th in the list.

Dublin has the second most expensive broadband of the cities surveyed. The average cost of a month of internet access (8Mbps) in Dublin is €46.60. Only Dubai at €73.50 costs more.

Dublin, though was only a mid-ranking city in terms of the cost of a cappuccino (30th out of 55), a full course dinner for two in an Indian restaurant (21st out of 55th) and for a meal out in a neighbourhood pub for two (17th out of 55).

The average cost of a “cheap date” comprising of a taxi journey, dinner for two, soft drinks, two movie tickets and a couple of beers is €106.84, only the 21st most expensive of the city’s surveyed.

Taxi fares too are relatively cheap in Dublin; the city is 21st most expensive for a taxi journey and 29th to hire a car for the day.

Dublin fares badly on the quality of life index, falling 21 places from 22nd to 43rd out of the 55 cities surveyed.

The city with the highest quality of life is Zurich in Switzerland, followed by Wellington in New Zealand, Copenhagen in Denmark and Edinburgh in Scotland.

The city with the highest monthly salary is San Francisco, the tech capital of the United States and of the world, where average net after-tax incomes have increased by 88 per cent over the last five years from €3,115 in 2014 to €5,858 fuelled by the city’s continuing tech boom.