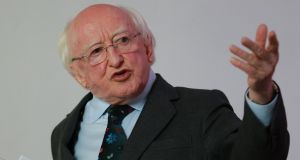 A Co Cork community has been praised by President Michael D Higgins for commemorating its past. Photograph: Nick Bradshaw/The Irish Times

A Co Cork community has been praised by President Michael D Higgins for commemorating its past and recording its links with some of the seminal events in the fight for Irish freedom by developing a museum to preserve both documents and artefacts from the time.

President Higgins said the Kilmurry Independence Museum in Mid-Cork was an important amenity which revealed the area’s links with events of 1916, the War of Independence and the Civil War and consequently would prove a valuable resource for people interested in the revolutionary period.

“The village of Kilmurry can claim an important role in the story of Ireland’s fight for independence - not only does it lie just a few kilometres from Beal na Blath, the site of Michael Collins’s assassination but it was here that Terence MacSwiney who played his own significant part in Ireland’s journey towards independence, was born,” he said.

“When we reflect on the turbulent chapters of Irish history that were written between 1917 and 1923, the west and mid-Cork regions can be seen to have played an important role in events that would change the social and political nature of Ireland forever.”

President Higgins referenced the role of the West Cork Brigade under Tom Barry and Liam Deasy and their successes against British forces at nearby Kilmichael and Crossbarry as further evidence of Kilmurry’s links with the story of Ireland’s fight for independence.

“There can be no doubting the significance of this region in the history of Ireland’s revolutionary period and I am delighted therefore that some of that rich history with its profound connection to our story of independence will be preserved here in Kilmurry and made accessible to all.”

The president said great credit was due to the Kilmurry Historical and Archeological Association for having the foresight to develop such a space and it was testament to the sense of community that exists in Kilmurry that it was so committed to the preservation of an important part of Ireland’s national heritage.

“As President of Ireland, it always gives me great pleasure to witness these occasions in which communities come together to create such spaces which has such power to connect us to a common past,” President Higgins told an audience of several hundred.

“Such works of historical importance are valuable endeavours which recognise that places such as this museum and cultural centre provide unique portals into a shared and rich past,” he said as he officially opened the Kilmurry Independence Museum.

“Today is the culmination and celebration of a long journey which saw many volunteers generously give up their time to research, design and source and raise funding for this important project - you can be very proud of what you have achieved.”