President calls for patience amid ‘coarsening’ of Brexit debate 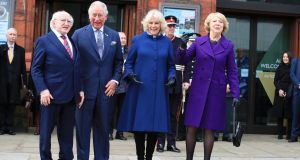 Michael D Higgins and his wife Sabina, along with the Prince of Wales and the Duchess of Cornwall attend a reception at Victoria Gallery and Museum, University of Liverpool. Photograph: Peter Byrne/PA Wire

President Michael D Higgins has warned of a coarsening of the debate over Brexit on both sides of the Irish Sea, calling for patience and an acknowledgment of the complexity of the issues involved.

Speaking in Liverpool on the second day of a three-day visit to Britain, the President said that Brexit’s critics as well as its advocates should choose their words carefully.

“I think there is no benefit whatsoever in a coarsening of the language and there are indications that it is happening and I think I might plead with people for patience in relation to this. Matters that are complex require what I call mind work and that’s important,” he told The Irish Times.

“There isn’t any value for anybody…on the British side saying the Irish are difficult or the Irish are responsible for us not getting a deal. There’s no value whatever in it. No more is there for people indulging in some kind of ancient atavism or calling out of it atavistic echoes of saying aren’t the Brits terrible.”

Mr Higgins spoke of his regret at Britain’s decision to leave the European Union, adding that its consequences had not been clearly thought out in advance.

He said it was hard to see how any British government could put in place an economic framework that can match the benefits of EU membership.

“As a political scientist I would say there are serious issues over the quantity of information that was made available, including the distortions of information that perhaps were offered to the public who had to make a choice. And then you would go further and say well it is if you’re seeking opinion on such a complicated matter, there are responsibilities that go with it,” he said.

Mr Higgins and his wife Sabina on Tuesday met Prince Charles and his wife Camilla, Duchess of Cornwall at the Victoria Gallery and Museum. The President and the prince are joint patrons of Liverpool University’s Institute of Irish Studies, which announced a new lectureship under their patronage.

They had a 15-minute private meeting at the museum before being greeted by students, academics and others at a short reception that included readings of a letter from John McGahern to Seamus Heaney and of a poem in Irish by Nuala Ní Dhomhnaill and its English translation by Paul Muldoon.

At a lunch with business figures later, the President spoke about the value of regionalism for making the best use of resources, forming economic policy and delivering it in a politically accountable way.

“We will all benefit from authentic regionalism with the capacity to ascertain possibilities and difficulties, establishing policy, make investment choices and be accountable to the people,” he said.

“Such a regional approach, as you are pursuing here in Liverpool, might also foster opportunities for more bespoke co-operation and collaboration with Ireland, approaches tailored to your strengths and particular circumstances, and through which we can achieve new possibilities together.”