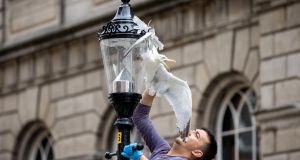 Irish Times page one photograph of a man rescuing the injured seagull in Dublin on Sunday.Photograph: Tom Hon/ The Irish Times

Seagulls generally get a bad press being regarded as a noisy bird with a piercing shriek, and an aggressive pilferer of chips, ice cream and sandwiches.

They are especially active this time of year when more people are dining al fresco and there’s a lot more rubbish around.

Yet a stricken seagull elicited a lot of public sympathy when the bird became impaled on a lamppost in central Dublin.

A large crowd of onlookers gathered around the seagull, but were unable to help. Three gardaí arrived from Pearse Street.

Photographer Tom Honan was quickly on the scene. “The seagull was impaled on the metal grate on the top of the lamp and the side of his wing had become caught it,” he said.

“He was fluttering around for a while and making a lot of noise. There was about four or five people hanging around, but they couldn’t get a ladder.”

Eventually a Romanian cleaner, who was nearby, took the bird down from the lamppost, but not before he gave his rescuer a few painful pecks.

The bird was clearly badly injured as it could not fly away and his left wing was badly damaged.

The seagull was placed a box and taken to the School of Veterinary Medicine in UCD for treatment.