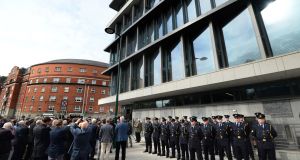 A row has broken out between the Office of Public Works (OPW) and a major builder over extra costs at the €28 million Kevin Street Garda station in Dublin’s inner city.

The station, considered to be the most advanced facility of its kind in the country, was opened last August. Up to 220 gardaí work in the facility, which measures 12,240sq ft and was built alongside the old Kevin Street station, which is set for refurbishment.

It is thought that the dispute between the contractor, Galway-headquartered JJ Rhatigan, and the OPW, relates to a significant sum of more than €3 million.

In a letter to the Dáil’s Public Accounts Committee, the chairman of the OPW confirmed that “negotiations are ongoing between the OPW and the contractor in respect of claims for additional costs submitted by him during the construction phase of the Kevin St Garda Project”.

In the letter, Maurice Buckley writes that “agreement could not be reached between both parties during these negotiations and the issues under dispute have been referred by the contractor for conciliation under the dispute resolution procedures provided for in the contract”.

According to Mr Buckley, a timeframe for concluding that process is not currently available as the dispute resolution process has only just begun.

In addition to housing high-tech facilities associated with the divisional Garda headquarters located in the station, the building was finished to a high specification, with several features designed to make it a public building and to enhance the appeal of the exterior design.

These include a bespoke railing inscribed with Irish poems, some of them centuries-old, all the way through to work by Seamus Heaney from the 21st century. The oldest poem cast into the railing is the Cride Hé, from the ninth century.

At the official opening of the station, OPW architect Ciaran O’Connor said the design team “wanted to move away from the idea of the Garda barracks and to a public building”.

Social Democrats co-leader Catherine Murphy, who is a member of the PAC, said she wanted to examine the tender process and see how such a large gap between the projected budget and the outturn emerged.

“What goes wrong is when there’s add-ons, things not nailed down in the beginning. If we want to deliver public contracts in a way that comes in on budget, we have to build certainty into our tendering process. What was added, what was the overrun, why didn’t the tender accommodate the actual cost of delivering it? Those are the questions I want answered.”