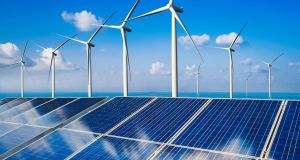 Ireland has agreed to pay €50 million to Denmark and Estonia for a “statistical” transfer of renewable energy to make up for a shortfall in our output of green power.

Cabinet today signed off on plans to pay Denmark a total of €12.5 million and Estonia €37.5 million for a total of 3,500 Gigawatt hours of renewable electricity - however, even though the transfer means the energy counts towards Ireland’s renewable energy targets, it takes place on paper only.

In a statistical transfer, a specified amount of renewable energy is deducted from one country’s share of renewable energy in gross final energy consumption and added to another’s. The Government today confirmed that the transfer is needed as Ireland is set to fall short of its overall target to meet 16 per cent of energy demand from renewable sources by between three and four per cent.

The agreement also covers an option for further purchases of between 500 and 1,000 Gigawatt hours of further energy. A Government spokesman said that the payments were not annual “in that the payments this year are to try and ensure compliance for 2020”

“We will pay the bulk in 2020 with a further amount in 2021 based on the final assessment of the portion of renewable energy we have by year end calculated in mid 2021,” the spokesman added.

The Cabinet on Tuesday also considered the annual report of the Residential Institutions Redress Board for 2018, which makes financial awards to assist the recovery of those who as children were resident in certain institutions in the State and were abused during their time there.

A spokeswoman confirmed that the board had received 16,650 applications by the end of 2018, and had made 12,016 awards following settlement, a further 2,994 following hearings, and 571 following review. Some 1,069 applications were withdrawn or did not result in a redress payment.

The Government also agreed that the State would enter into the EU advanced purchase agreements for a Covid-19 vaccine with pharmaceutical company Curevac. Ireland has now given an undertaking to purchase vaccines from five different manufacturers, and has entered into a similar agreement with Sanofi Pasteur.

Based on the agreement with Curvac, Ireland will receive approximately 2.5 million doses of the vaccine, which does not have to be stored at ultra-cold temperatures.

Elsewhere, the Government agreed to draft modifications to a ban on rent increases and evictions on tenants whose ability to pay rent has been impacted by the pandemic through to April 12th, 2021. The modifications approved by the Government to the Residential Tenancies and Valuation Act 2020 will also require tenants in arrears to engage with the RTB and MABs to agree arrangements with their landlord as soon as practicable to pay the rent.

The Government also agreed not to pay the usual €500 million contribution to the Rainy Day Fund, due to the impact of the Covid-19 pandemic on the public finances.