Ireland's original hard Border: Rare footage shows what it was like

British Pathé newsreel from 1924 depicts the ‘much debated Ulster Border’

Former Lord Mayor of Dublin Alfie Byrne refers to the border between Ireland and Northern Ireland as a 'festering sore' in an archival film that has recently come to light. Video: IFI Irish Film Archive / British Pathé 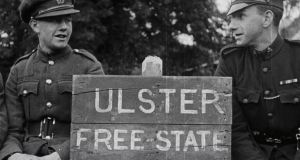 An Irish soldier and an RUC officer share a joke at the original Irish Border in 1924. Still from Pathé, courtesy of the Irish Film Institute

The original hard Border on the island of Ireland was imposed by the Irish Free State in 1923, and footage of it has now been digitised and put online.

The British Pathé reel shows Irish Army soldiers and Royal Ulster Constabulary policemen joking and laughing with each other in 1924, but the film is introduced with a preamble that shows the Border was as hot a topic then as it is now.

“The seat of all the trouble – first pictures from the much debated Ulster Border.”

The footage is from an unnamed Border town and shows an RUC officer looking over into the Free State where the tricolour flies from the top of a castle turret.

The film comes from the time between the imposition of customs posts by the Free State government and the findings of the Boundary Commission in 1925, which left the Border intact.

Many nationalists on both sides of the Border had hoped the commission would transfer nationalist areas in the North to the Free State, but its report was leaked in advance and envisaged no such transfer.

The footage has been acquired by the Irish Film Institute, and it and 34 other films from the early years of the Irish Free State have been put online.

The Border was the most significant issue for Dublin’s colourful lord mayor Alfie Byrne, who served in the position between 1930 and 1939.

In 1935 he declared in a rare recorded interview, in tones that could be repeated today, that the Border was a “festering sore which is a danger to our country and to England”.

“If we can get that Border removed by consent, and our people can settle down, I am satisfied it will be to the benefit of England and to our people in Ireland.”

Byrne was critical of those who shouted the word “traitor” to people they disagreed with and he suggested that politicians would be better working together than slinging insults at each other.

“This little country of ours cannot afford to keep two parliaments with two sets of officials going. I hope the day is not so far off when they will think of the unemployed and think of the future of the country regardless of what it means to themselves in their public positions.”

It is the second release by the IFI of footage about Ireland that it acquired from British Pathé. A previous release focused on the decade of centenaries and the foundation of the State.

IFI’s head of archive, Kassandra O’Connell, said the Border footage showed how little had changed in the last 75 years.

“We are still grappling with the lack of understanding and the complexity of Ireland’s political situation.”

She had assumed that British Pathé’s Irish footage had been digitised but subsequently found that it hadn’t and was in danger of being lost for ever.

“The material is very old. It’s on nitrate. If we hadn’t done this now, the material wouldn’t be there in five or six years.”

Other highlights of the collection include celebrations to mark the declaration of the Republic of Ireland in 1949, the inauguration of Douglas Hyde as the first president of Ireland in 1938 and footage documenting the lives of ordinary people in the country.

1 Why Sinn Féin will not call the State by its name
2 Spread of coronavirus triggers European travel curbs
3 What evidence is there that the IRA still controls Sinn Féin?
4 Brazilian father to be deported days after daughter’s birthday
5 Anti-social chants bringing sour note to schools rugby
Real news has value SUBSCRIBE