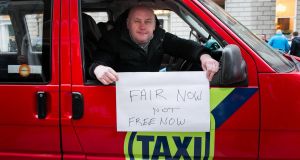 Taxi drivers mounted a large protest in Dublin city centre on Thursday evening to demonstrate their opposition to a recent increase in the commission charged by the taxi app, Free Now.

It was the second time this week that taxi drivers blocked off Upper Mount Street, where Free Now has its Irish headquarters, to highlight their growing anger at the company’s decision to raise its commission from 12 per cent to 15 per cent of fares.

Gardaí diverted traffic away from the area as dozens of taxis were parked on Upper Mount Street while their drivers gathered outside Free Now’s offices calling for a boycott of the firm.

AA Roadwatch said there was some heavy localised disruption to traffic which resulted in some slight delays across the wider city including the South Quays.

Free Now was originally known as Hailo when it launched in the Republic in 2012 before changing its name to MyTaxi in 2014 and a subsequent rebranding to its current name last year.

A company spokesman said it had kept its “low commission structure” of 12 per cent for as long as possible and claimed the new 15 per cent rate was in line with a similar increase which had been applied in the UK since September.

“It will enable us to continue to grow the passenger base make ongoing investments in the technological development of the app and ultimately boost the national taxi supply in Ireland,” the spokesman said.

“We understand that this is not a welcome decision to some drivers but is required for the development of the business which brings work to drivers.”