Dogs that didn’t bark the focus of bank inquiry hearings 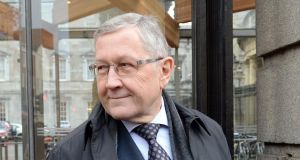 The dogs that didn’t bark were the focus of this week’s public hearing of the bank inquiry. The extraordinary string of failures which meant no-one called a halt as the bubble inflated, or even took any measures which might have lessened the blow, were outlined by Klaus Regling, the co-author of the first government commissioned report into the crisis and Philip Lane, Trinity College economics professor.

The latest evidence points to one of the key issues for the inquiry. To what extent do they focus on the headline issues of what happened on the night of the guarantee and to what extent on the years leading up to it, when the problem was created?

The focus on the report compiled by Regling and the late Max Watson was on the lead up to the bust. “Ireland was a country where it seems no-one was really in charge,” Regling said, pointing to a “national obsession” with property.

None of this was particularly new, but Regling did point to one issue which will be central to the inquiry. This is that there were things which the Central Bank and Financial Regulator, bank boards and the government should have noticed in the mid-2000s, at the latest, and actions they could have taken. Instead, what he called a national “blind spot” stopped this happening.

The government could have tightened its budget policy, taking cash out of the economy, Regling noted.

Meanwhile, regulatory action – such as imposing the kind of mortgage lending caps now under discussion – could have at least stemmed the mad frenzy of property lending. But the whole regulatory system was not able to deal with the scale or complexity of what it faced.

If action had been taken earlier “perhaps a soft landing would have been possible”, Regling said. Instead the Irish crisis developed to such an extent that it eventually provided a threat to the entire euro zone.

Professor Lane’s evidence also focused on the failures to act as the bubble inflated. He outlined the dangers which emerged as Irish banks got access to new sources of finance via international borrowings, allowing them to expand their loan books exponentially.

The country could have been protected to an extent if the government in the early 2000s had put money aside in a special fiscal reserve fund, a kind of “rainy day”account in addition to the money paid into the National Pension Reserve Fund. This could have eased Ireland’s passage when the crisis hit, Lane argued.

He also looked at how the crisis might have hit, had Ireland not been a member of the euro, arguing that the initial bust would have been sharper and more painful, but that recovery might have been quicker, with tools such as currency devaluation available to boost growth.

As it moves from its first general inquiry phase into its so-called “nexus phase” after Easter - when questions will be put to those centrally involved - the inquiry has to decide where to concentrate its fire. It is already in correspondence with the banks, the Department of Finance and the Central Bank, and questions are emerging about the extent of documentation it has sought, where it can get it and what it will be able to process.

The trick will be in finding documents which give insights into how bank boards, the regulatory machine and government made decisions, particularly from 2000 on, and why the warning signs identified by Regling were missed, or ignored.

Given that the inquiry will also examine what happened on the night of the guarantee and afterwards right up to the end of 2013 - and that it is due to report by November - where it sets its priorities will be key.