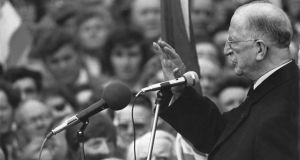 Eamon de Valera was never a republican, and his support and that of other Irish nationalist leaders for an Irish republic during the War of Independence was a simplified slogan adopted to gather international support, according to a leading Irish historian.

Prof David Fitzpatrick of Trinity College Dublin said he believed that most of “the so-called republicans” involved in the struggle for Irish freedom during the revolutionary period 1919 to 1923 did not actually want an Irish Republic.

“I think the slogan of a republic was one chosen for an American audience because it was believed in order to gain support in the US and elsewhere and not rely on British politicians to bring about Irish freedom, the only way to mobilise support was through a republican propaganda campaign

“In order to gain significant international support, particularly in the context of the post war world re- organisation, the only way to do it was to make a strong uncompromising claim as every other nationality was trying to do at the Paris Peace Conference and elsewhere - to me it was a slogan,” he said.

According to Prof Fitzpatrick, it was an understandable tactic as had de Valera and other Irish nationalist leaders gone to the US Congress and argued “for a casual arrangement for Home Rule with exemption for a number of counties, they would have been laughed out of court”.

According to Prof Fitzpatrick, de Valera and the nationalist leadership supported the idea of an Irish Republic because they thought it was “a marketable proposal” which they believed could work as a means of achieving some form of self determination for Ireland.

Prof Fitzpatrick made his comments in response to a question from a member of the public during a panel discussion on the War of Independence chaired by Irish Times News Editor Mark Hennessy at the inaugural West Cork History Festival in Skibbereen.

Responding to the question as to what the ordinary IRA volunteer envisaged by an Irish republic, Sunday Times journalist and commentator Kevin Myers said that he believed that a good indication of what Irish volunteers were fighting for could be gleaned from their actions in the GPO in 1916.

“The nature of the volunteer movement became quite apparent during the reciting of the rosary in the GPO,” said Mr Myers who also cited how IRA men in Cork gave a a captured British soldier a set of rosary beads and said the rosary before executing him.

The Catholic nature of the nationalist struggle was also evident in an event at Collins Barracks in Cork on St Patrick’s Day 1923 when Maj Gen David Reynolds of the National Army, under directions from Gen Richard Mulcahy in Dublin, raised a tricolour bearing an emblem of the Sacred Heart.

The Sacred Heart had been made by a Catholic French organisation established in 1871 to counter the perceived evils of republicanism, and the incident highlighted perfectly the ambiguity within the Irish republican movement about what Irish republicanism actually meant, Mr Myers said.

“So here in the heartland of republican Ireland you have a flag on one side denoting the Republic and the other side depicting a Sacred Heart, and over the next 50 years, which side of the flag prevailed in the conduct of governance in Ireland . . . we can see that quite clearly.”