Another 14 deaths in Northern Ireland as ‘circuit breaker’ is lifted 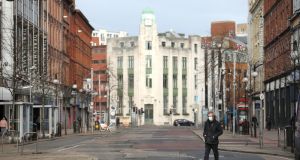 A man walks through Belfast city centre as the two-week circuit-break lockdown began last month. The added restrictions are due to be lifted at midnight. Photograph: Peter Morrison/PA Wire

The North’s Minister for Health has warned anyone objecting to the Covid-19 vaccine on anti-abortion grounds that they are “not entitled to mislead” and urged them to “think again” when “making unfounded claims on social media”.

Robin Swann said the Pfizer vaccine did not contain any human cells, and it was “disappointing that people calling themselves pro-life would be objecting to vaccination programme that will save many lives.”

He said widespread take-up of the vaccine was needed in order to protect people, particularly the older and more vulnerable, and this would also help the Executive move gradually towards easing coronavirus restrictions.

“It is the case that the development and testing of some vaccines can include the use of human cell lines grown in labs, having been replicated from fetal cells obtained in previous decades following abortions,” Mr Swann said.

“If people want to object on those grounds and leave themselves unprotected from Covid-19 that is their choice. They will be at odds with other pro-life advocates including the Irish Catholic Bishops’ Conference who issued a very clear statement this week.

“Any link between any vaccination development and abortions is incidental and remote, involving cells replicated in labs.

“As the Irish Catholic Bishops’ Conference stated, refusal to accept a vaccine could contribute to significant loss of life in the community and especially among those who are most vulnerable.

“In matters of conscience, I believe saving the lives of our fellow citizens in the here and now must come first,” he said.

Asked at an Executive press briefing on Thursday about Facebook comments by the DUP councillor John Carson which made erroneous claims about the vaccine, the First Minister and DUP leader Arlene Foster said these were “palpably not true” and he should “reflect” on that.

“John has made comments, I don’t agree with them, I think he is wrong, and the position that I and the party have is that this vaccine is safe and people should take it because it is our pathway to normality,” she said.

A further 14 people with Covid-19 have died in Northern Ireland, according to the latest figures released on Thursday by the North’s Department of Health.

It brings the total number of coronavirus-related deaths reported by the Department to 1,099.

An additional 441 people tested positive for the virus in the last 24 hours, the Department said.

A total of 417 patients are in hospital in the North with Covid-19, and 29 are in intensive care. There are 107 outbreaks in care homes.

Both the First and Deputy First Minister warned against complacency ahead of the lifting of a two-week “circuit breaker” lockdown from midnight on Thursday, with Ms Foster saying that the easing of restrictions did not mean there was “any easing of the need for each person to follow the public health guidelines.”

Non-essential retail and close-contact services such as hairdressers as well as hotels, cafes, restaurants and pubs serving food can reopen, though they must close by 11pm.

Ms Foster said that “personal responsibility” was key, and while provision had been made to allow people to gather at Christmas, “they should do so in a safe way. Just because we say you can doesn’t mean you have to,” she said.

Michelle O’Neill warned that this was a “fragile time” and the next number of weeks were “crucial.”

“If people want to have a nice Christmas with their family, don’t ruin it by being reckless in the next number of weeks.”

The North’s chief scientific adviser, Professor Ian Young, said people had not restricted their movements during the two-week circuit-breaker as much as officials had hoped.

“Therefore we’re not going to see the full benefit that we hoped for from these two weeks of restrictions,” he added.

He said the R – reproduction – rate of the virus was currently about 1, and Northern Ireland was facing a “potentially difficult and risky period” with the relaxation of restrictions over Christmas.

The R rate measures the average number of people infected from one other person. Additional reporting – PA.