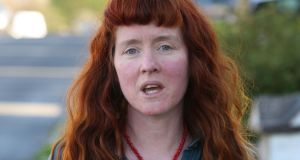 Susan Walsh recently visited an Aldi shop in Galway with her young daughter but was ‘refused entry’ by a security man. Photograph: Joe O’Shaughnessy

Parents who bring young children with them as they buy essential groceries have spoken out about how uncomfortable they have been made feel by staff in some supermarkets despite claims by stores that there is no policy barring small family units from shopping together.

Retailers have adopted strict social distancing policies to slow the spread of Covid-19 and people have been encouraged to shop alone, but for many single parents that is impossible and some have expressed concern they are being unfairly targeted.

Susan Walsh recently visited an Aldi shop in Galway with her young daughter but was “refused entry” by a security man and “so rudely told if I wanted to go in I’d have to leave ‘her’ there as he pointed to the wall beside him”.

She said she explained that she was a “solo parent and that she would be going in the trolley”.

He said that was not possible. “My daughter got quite upset at this stage and I felt shook, rage and the tears fell as I walked back to our bikes. She wondered if she’d ever be allowed in again to which I replied we would never be going back there anyway.”

When she contacted Aldi via its social media channels to complain, she received an immediate apology and was told that while it was “encouraging all customers to try to reduce the number of family members they bring with them into our stores” it appreciated that “this is not possible for all of our customers, especially parents and children”.

Aldi added that it was asking “all store staff and security to be extra cautious of this”.

We sent Aldi details of Ms Walsh’s experience and in response received the following statement from the company. “In order to help with social distancing, we are encouraging all customers to try to reduce the number of family members they bring with them into our stores.”

Katie Reily went to a Tesco outlet in Midleton in Cork at the start of April and, while she was not denied entry, she was questioned “to the point of discomfort about why I needed to bring my children into the shop with me”.

She said a manager had told her the shop was “trying to protect everyone and that he was responsible for his employees and that in future I needed to come alone”.

As a widow she said she had no choice but to bring her young children with her. “It was devastatingly obvious that Tesco was discriminating against children and, by default, single mothers. No woman should have to state her relationship status before being allowed to shop!”

Laura Connolly from Waterford brought her five-year-old daughter to another Tesco in Ardkeen only to be told they were not allowing young children in. When she explained she was a single parent and could not leave her child on her own, she was told it was “fine for now but next time to organise something else”.

She later spoke to a manager who apologised and said he would talk to the staff member. “I was so embarrassed in front of everyone, it was really awful.”

Ms Connolly told The Irish Times that supermarkets needed to use common sense. “If you are entering the shop with children then you are obviously without a choice to leave them at home or in the car.”

In response to queries from The Irish Times about shoppers’ criticisms, a Tesco spokeswoman stressed that the retailer was “not discouraging customers from bringing their children to store”.

She said it was “encouraging people to shop one person per trolley, whenever possible. We realise this is not always feasible and of course we understand that. As we all respond to Covid-19, we want customers to know that their safety and that of our colleagues is our priority. We understand this is a challenging time for everyone, and we are doing everything we can to make sure everyone can get what they need as efficiently as possible in a safe and stress-free environment.”

In a letter to The Irish Times, representatives of groups including the Children’s Rights Alliance, the St Vincent de Paul, the Free Legal Advice Centre and the National Women’s Council of Ireland warned that a blanket ban on children accessing supermarkets could cause or exacerbate food poverty or lead to concerns in relation to child protection and welfare issues.

The letter said it would also appear to be “indirectly in breach of their obligation not to discriminate on the family status ground in the Equal Status Acts 2000”.

It suggests that retailers choose alternative measures that ensure parents can shop safely with their children where this is necessary, including prioritising online delivery services for frontline workers and lone parents, and the allocation of special shopping times for parents who must bring children with them.