Commemoration should have particular focus on Burning of Cork, meeting hears 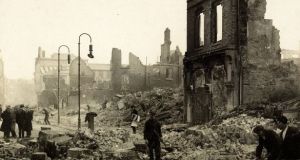 A garden of commemoration to remember the 1,000 or so people killed in the revolutionary period in cork is among the proposals to be considered by Cork City Council following the first of a series of public meetings on how to mark the Decade of Centenaries on Leeside.

Over 60 representatives from various voluntary organisations met at Cork City Hall to discuss possible ways of marking the revolutionary period in Cork city and county and following over two hours of discussions in smaller groups, a number of preliminary projects were proposed.

Dan Breen of Cork Public Museum, who was acting as a facilitator for one group, revealed that they had come up with the idea of a garden of commemoration, similar to the Garden of Remembrance in Dublin, which could be located in the Cork docklands or some other central location in the city.

“Roughly about 1,000 people were killed in Cork city and county between 1916 and 1923 – we recognise that there may be debate about who should be included in that memorial so we’re not going to start that now but definitely some sort of Garden of Remembrance should be created in Cork.”

Mr Breen revealed that among the other ideas that their group had come up with was the idea that Dáil Éireann should honour Cork’s role in the fight for Irish freedom by sitting in Cork as happened when it marked the sitting of the first Dáil by holding a meeting in the Mansion House.

Another facilitator, Helen McGonagle from Cork City Library, revealed that their group had proposed the creation of an interpretative centre in the city, telling the story of Cork in 1916, the War of Independence and the Civil War, which would reflect the various sides in the successive conflicts.

She said that 2020 should be focus of the Decade of Commemorations on Leeside with commemorations building towards the 100th anniversary of the Burning of Cork in December 1920 when British forces set fire to much of the city centre in retaliation for an IRA ambush in the city.

The group had suggested that with modern technology it should be possible to mark the Burning of Cork, which left over 2,000 people homeless, with a sound and light show that would convey the extent of the damage while Cork City Fire Brigade should be central to any commemoration of the event.

Another group suggested screening Conal Creedon’s documentary, The Burning of Cork on large screens throughout the city to mark the centenary on December 11th/20th, 2020 while another group suggested inviting RTÉ to get involved through Nationwide to highlight Cork’s role in the fight for independence.

Other suggestions heard at the meeting included: a concert featuring the music of the time; holding a competition for song writers to write a song telling Cork’s story during the revolutionary period; a ceremony recalling the inauguration of Tomas MacCurtain as Lord Mayor in January 1920 and re-enacting the inquest into his murder by the RIC on March 20th, 1920; the establishment of walking tours of Cork city akin to the Titanic Trail in Cobh, to point out places associated with the fight for freedom and the installation of markers at every spot where someone was killed in the conflict.

Several speakers referred to the success of the commemoration of the 1916 Rising which recognised the complex nature of the conflict and many suggested that Cork should follow a similar path with an emphasis on reconciliation in both remembering the War of Independence and the Civil War.