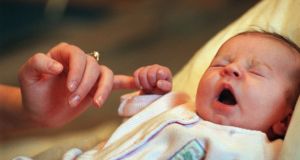 The standings were close near the top of the chart, with ties for second and third place for the girls and boys respectively.

The rest of the girls’ names were quite evenly split, but combining the numbers of similarly sounding Isabel, Isabelle, and Isobel brings them to the top of the table alongside Chloe.

In terms of the boys, the next most popular names were Charlie, Cian and Sebastian.

The arrival of almost 350 babies were announced in the Saturday column last year, including the births of 14 sets of twins and one set of triplets.

While the shift towards more unusual names in recent years has led to there being no Marys, Margarets or Johns in 2015, there was still a strong Irish feel to many of them, including Doireann, Élodie Bríd, Fiadh, Odhran, Róise, Róisín Cát Tuong, and Sósanna.

The birth of Princess Charlotte in the UK last May did not lead to a flurry of Charlottes over here.

Just three made their way into the list last year, one of which was born some months before the princess.

In 2014, Jack and Sophie topped the charts. Last year, just two babies were named Sophie in the announcements.

There were three Emilys in The Irish Times’ list last year.