Ban on Israeli settlement goods will be hard to police 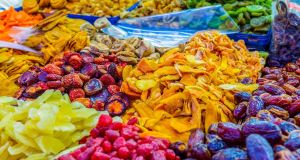 It will be difficult for Irish consumers to follow proposals making it an offence to purchase goods and services from Israeli settlements given continuing confusion over the origin of many products from the region.

Only a handful of goods sold in Ireland can be readily identified as coming from the settlements covered by the proposed ban. Many others – notably fruits and vegetables – might be grown in an affected area before being shipped to Israel for packaging and distribution before being marketed as ‘Produce of Israel’.

Imports to Ireland from Israel from January to October of last year were about €50 million, compared with €231 million in exports.

According to EU estimates, settlement goods make up about 1 per cent of this, which would put the total value of such products at €500,000. A 2012 government estimate put the figure then at about €1.5 million, while aid agency Trócaire estimates that about €1 million of settlement goods are imported annually.

Many fruit and vegetables such as grapes, oranges, dates, herbs, avocados, peppers and potatoes come from the settlements. More than half of the world’s medjool dates are supplied by Israel, and the majority of these come from an occupied part of the Jordan valley, where farmers say they have been forced off their land by settlers.

Ahava Cosmetics manufactures beauty products in the occupied West Bank, and its products have been found in Irish shops.

Almost three years ago the European Union published guidelines for labelling products made in Israeli settlements. These state that farm produce and other goods from the settlements, which are illegal under international law, should be labelled if they are sold in the EU. Critics say the rules are too easy to circumvent.

According to NGOs operating in the region, companies have been filmed bringing milk from farms in such settlements to processing facilities inside Israel. By using such tactics, exporters can present their goods as “made in Israel”, thereby enjoying preferential access to the EU’s markets.