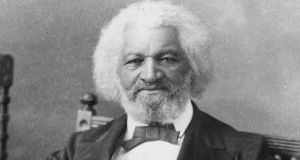 Frederick Douglass wrote about how heartened he was by his visit to Ireland. Photograph: MPI/Getty Images

Leading anti-slavery campaigner and human rights champion Frederick Douglass was honoured in Waterford yesterday when a plaque was unveiled to mark a speech he gave in the city during a lecture tour of Ireland in 1845.

Mayor of Waterford John Cummins unveiled the plaque on the facade of Waterford City Hall to commemorate the address by Douglass, a former slave who was one of the leading abolitionists of his day and an influence on the thinking of US president Abraham Lincoln.

“While in Ireland, Frederick had the great fortune to meet, befriend and work with one of our national heroes, Daniel O’Connell and, like O’Connell, he was a believer in non-violence and a passionate advocate of reform,” said Mr Cummins.

Irish experience
“He himself regarded his time in Ireland as significant in the development of his ideas. To quote President Obama, his Irish experience ‘defined him not as a colour but as a man’ . . . it is only right that the visit of such a significant figure to our city should be commemorated.”

Born into slavery in 1818, Douglass escaped in 1838 but it was only during his visit to Ireland and Britain in 1845 that his freedom was secured when some British benefactors bought him out of slavery, and he also wrote how heartened he was by how he was treated in Ireland.

“I am covered with the soft, grey fog of the Emerald Isle. I breathe, and lo! the chattel becomes a man. I gaze around in vain for one who will question my equal humanity, claim me as his slave, or offer me an insult,” he later wrote in My Bondage and My Freedom.

Among those attending yesterday’s ceremony, which was organised by Waterford City Council and Waterford Civic Trust, was Timothy J Madigan, director of Irish Studies at St John Fisher College in Rochester, New York State, where Douglass lived for 25 years.

“We started on this project about two years ago when we learned that Frederick Douglass had visited Ireland and the visit had a profound impact on him and when we learned he had spoken in Waterford, our sister city, we thought it was a connection worth exploring,” he said.

Ideal location
Waterford city archivist Donal Moore said once it had been established that Douglass had spoken in the large room at Waterford City Hall, it proved an ideal location to mark with a Waterford Civic Trust blue plaque. “The Frederick Douglass blue plaque will now become part of the Civic Trust’s Blue Plaque Trail, a walking trail of almost 40 plaques intended to commemorate a link between a particular location in the city and a famous person or event,” he said.