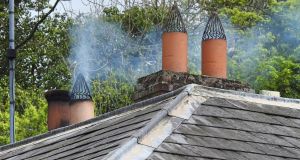 The Environmental Protection Agency has expanded its network of air-quality monitoring stations in recent years, but experts said more needed to be done. File photograph: Getty

Only a fraction of the towns that burn harmful smoky coal have air quality monitoring stations in place, an Environmental Protection Agency (EPA) study has found.

A ban on smoky coal was first introduced in Dublin in 1990, and has been adopted by many towns and cities across the country.

Another 14 towns either have monitoring stations planned or will be covered by facilities in another town that are slated for construction, the study found.

While the EPA has significantly expanded its network of air-quality monitoring stations in recent years, experts said that more needed to be done to fully protect against the public health risk caused by particulates produced by smoky coal and other fuels.

Research published in the European Heart Journal earlier this year suggests that dirty air is killing almost 800,000 people per year in Europe, more than double the previous estimate. Poor air quality has previously been linked to about 1,500 deaths per year in Ireland.

University College Cork Professor emeritus of Chemistry John Sodeau, who led seminal research into Irish air quality, said that “unless and until a fully comprehensive network is established in Ireland – best in conjunction with Northern Ireland – strategic decision making for central and local governments cannot be made”.

The EPA selects sites on the basis of geographical representativeness and on the basis of a report on solid fuel use conducted by the North-South Ministerial Council. The agency says it can abstract information about likely levels of pollution in other towns from its existing network.

Prof Sodeau said the EPA should be given the capital budget to extend the network so it could engage in pollution forecasting for at-risk groups like the young, old and those with respiratory conditions who can then factor that information into deciding whether to leave their homes.

What about fine particulates?

His comments come after the publication of fresh data from the EPA suggesting that tiny pieces of matter known as particulates have surged in recent weeks as the weather gets colder and more solid fuel is burned.

Prof John Wenger of UCC’s Centre for Research into Atmospheric Chemistry said the benefits of installing more stations had to be balanced against the costs, which are upwards of €50,000 per site.

He said a lot of information could be abstracted from representative towns, but argued that there were gaps in the Irish network. For example, he said, there was no monitoring station in Co Kerry. He also called for increased detailed monitoring and better predictive analytics, as well as increased data sharing. “It is there, but it needs to be better,” he said.