‘We’re not a primary fire fighting agency, we got to Donegal as soon as we could’

Firefighters and hundreds of local people and volunteers battled a large gorse fire in west Donegal over the weekend. Video: Jimmy Stafford 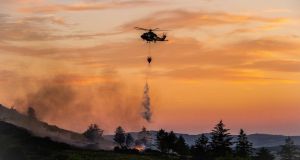 The Air Corps has defended its response time in helping contain gorse fires in Co Donegal on Monday, saying it is not a primary fire fighting agency.

A large wildfire scorched hundreds of acres of land in the west of Co Donegal after beginning in the village of Annagry.

The delay in the involvement of the Air Corps was because crews had to be assembled “from the four corners of the country” according to Capt Kevin Fitzgerald.

“When we got the task we had to mobilise a crew. We don’t have the resources for fire fighting. Crews had to come from all over the country,” said Capt Fitzgerald.

Although the call for air support was made on Monday morning, it was 1pm before the task was approved by the Department of Defence following assessment.

Captain Fitzgerald told RTÉ’s Morning Ireland that fire fighting from the air is a very specialised task and is “relatively high risk”.

Because the Air Corps is not a dedicated fire service it takes time to respond, while it can respond to medical emergencies within 10 minutes, he said.

The director of emergency services at Donegal County Council, Gary Martin, told the programme the gorse fire in Co Donegal is under control for now.

However, he said caution is being applied given the nature of wind conditions. He appealed to the public not to do anything to cause fires to ignite.

Mr Martin said while there had been no loss of life and the loss of property was minimal, the loss to animals, flora and fauna was incalculable.

He thanked the community for their support in battling the fire. At one stage on Monday there were 100 community volunteers assisting 100 fire crew in Gweedore along with Civil Defence, the Coast Guard, Air Corps and the Defence Forces, along with a private sector helicopter.

Earlier on Newstalk Breakfast Capt Fitzgerald dismissed criticism that fire fighting from the air is more for image than impact.

He said “it is not about the amount of water”.

“Dropping 1,200 litres of water on a targeted area on an exact spot can saturate the vegetation ahead of the fire and stop it from going further,” he said.

“We’re not a primary fire fighting agency, we got to Donegal as soon as we could.”