Adams criticises report into his shooting as ‘incomplete’ 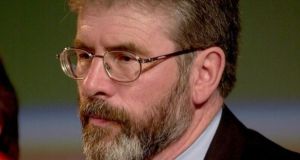 Gerry Adams called on Dr Michael Maguire to set aside his conclusions until he ‘had access to British Army files and other pertinent intelligence records’.

The Sinn Féin president Gerry Adams has criticised a report by the North’s Police Ombudsman Dr Michael Maguire into his shooting by loyalists 30 years ago as “incomplete”.

Dr Maguire in his report published today said that there was no evidence that the RUC was involved in a Ulster Defence Association gun attack that left Mr Adams with serious wounds.

Mr Adams however has called on Dr Maguire to set aside his conclusions until he “had access to British Army files and other pertinent intelligence records”.

Members of the UDA using its Ulster Freedom Fighters covername and led by John “Grugg” Gregg carried out the gun attack on a car containing Mr Adams and four other republicans as they were driving towards Belfast Magistrates Court in March 1984.

Mr Adams was hit in the neck, shoulder and arm. The driver, despite being hit, managed to escape the scene and drive to the Royal Victoria Hospital where the injured were treated by medical staff.

Dr Maguire in his investigation reported how Gregg and two other gunmen were arrested by an off-duty Ulster Defence Regiment soldier who was driving in the area, by an off-duty RUC officer who arrived at the scene, and by two British soldiers in plain clothes.

“We have talked to all the people involved in the events that day, including the perpetrators, the victims and the police. We have examined all the available evidence, including forensic and sensitive intelligence material and found no evidence that police knew of the attack beforehand,” he said.

Gregg and two other UDA men received lengthy prison sentences. When Gregg was released he once again became a senior UDA leader, being the so-called brigadier for south-east Antrim. In 2003 Gregg was killed during a feud involving his mainstream UDA and a group led by Johnny Adair.

Dr Maguire also reported how the off duty UDR soldier and the two other soldiers provided accounts as to how they came to be present at the scene and how these accounts were supported by independent witnesses. The off-duty police officer who also arrived on the scene has since died.

Dr Maguire carried out his inquiry following complaints by Mr Adams and some media reports that the RUC had advance notice of the UDA attack.

Mr Adams today thanked Dr Maguire and his staff for their investigatory work. He said however that he is to write to him asking him to set aside his findings. “In my opinion this report is incomplete. The ombudsman should seek access to British Army files and other pertinent intelligence records and set aside his conclusions until this is done,” he said.

Mr Adams said that Dr Maguire did not have access to British army files or those relating to its “Force Research Unit which was the British intelligence agency principally responsible for running agents and informers, like Brian Nelson, within the UDA”.

Mr Adams also said that the treatment by RUC officers of his family and of visitors to him in the hospital was “outrageous and intimidatory” and deserved to be thoroughly investigated.

He also complained that the ombudsman “based his conclusion that there was no prior knowledge of the attack on the denials of the would-be assassins and the fact that they were captured within minutes of the ambush”.

DUP Policing Board member Jonathan Craig said that those involved in apprehending the UDA gang were willing to be interviewed and to provide whatever assistance was necessary.

“The same level of openness and transparency would also be useful from Gerry Adams about many of the other incidents which occurred during the Troubles. It is nothing short of hypocrisy for Gerry Adams to question the openness of the police and army when he still denies ever being in the PIRA,” he added.

Ulster Unionist Assembly member Ross Hussey said the fact that the UDA gunmen were arrested at the time “demonstrated the value of law and order which the members of security forces upheld”.

“It is hugely regrettable that instead of showing gratitude, or indeed any grace at all, Gerry Adams and other senior republicans questioned the fact that a number of off-duty security personnel were in the vicinity at the time of the attack,” he added.